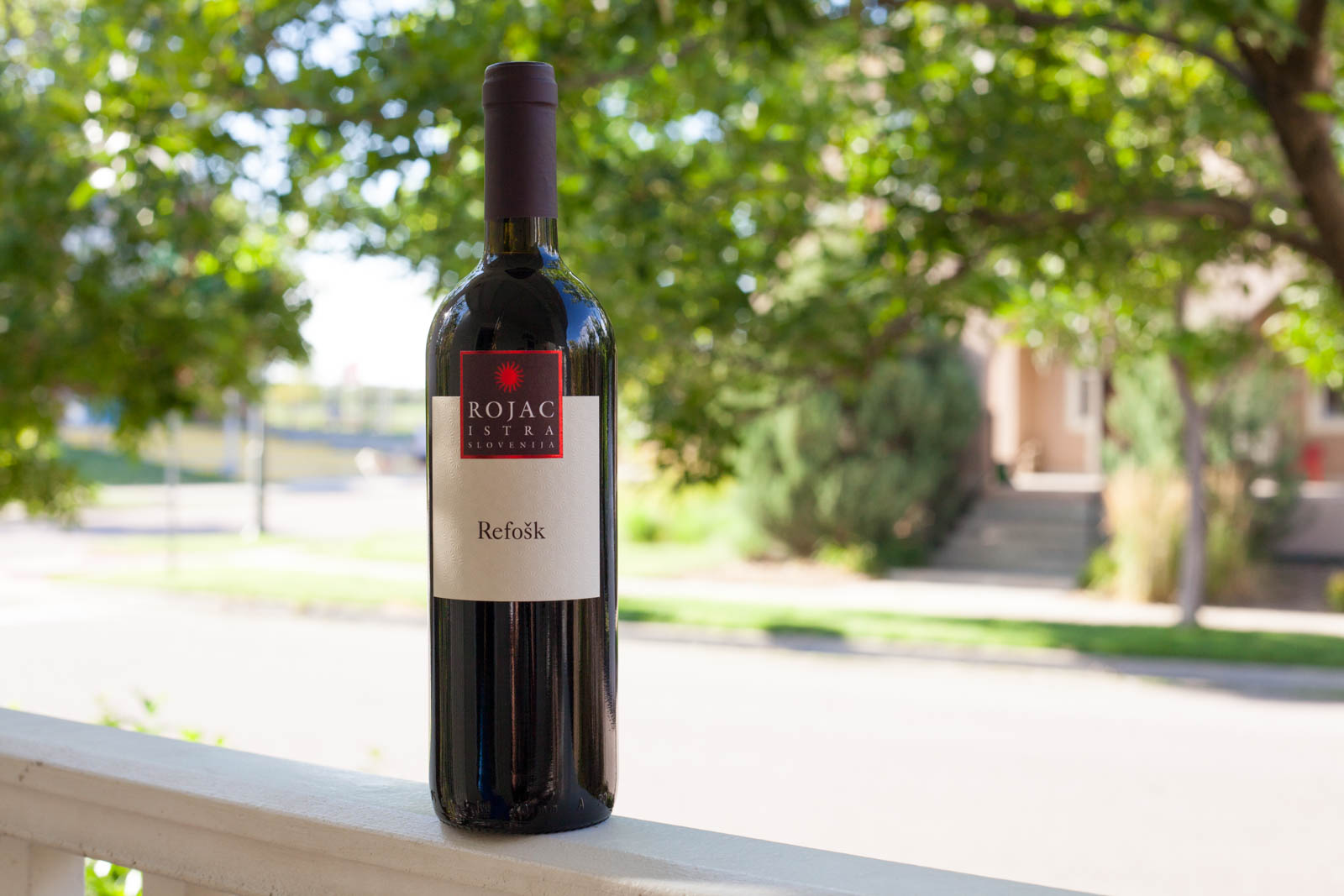 Buying solely on curiosity, I picked up a bottle of Rojac Istra Refošk at the Wine Cellars of Stapleton a few weeks ago. That’s worth repeating: Rojac Istra Refošk. I could barely pronounce it, much less identify whether Istra or Refošk was the grape. (And I still don’t know how to make that š character on my keyboard … I had to copy it from a Slovak translator website. Apparently, my web fonts also don’t know what to do with it).

This wine comes from Slovenia, and that is the only reason I bought it. I have read quite a bit lately about Slovenia and its epic mix of alpine terrain and unique cuisine — most recently in an issue of AFAR Magazine while flying across the country — and it continues to occupy a lofty spot on my bucket list of Places to Go.

And yet, this was the first time I had ever seen a Slovenian wine. Ever. Which is curious on many levels, since Slovenia has been making wine long before the Roman’s introduced it to France, Spain and Germany. Today, there are more than 28,000 wineries in this New Jersey-sized country.

And it must be good stuff, because they keep a lot of it for themselves. Of the 90 million liters of wine produced, only 6 million liters are exported. So a fraction of what is exported makes it to America, and only a small fraction of that makes it to Colorado, and … well, now it becomes clear why I’ve never seen a Slovenian wine.

A Tangled Web of Grape History

The Rojac Istra Refošk wine hails from the Istrian Peninsula, an arrowhead chunk of land in the northern Adriatic that is shared by Italy, Slovenia and Croatia. Here, a sub-Mediterranean climate fosters a handful of grape varieties ranging from international (such as Cabernet Sauvignon) to localized variants, such as the Istrian variety of Malvasia (Malvazija Istriana) and the beloved Refošk, which many believe is part of the ancient grape family called Refosco.

Refošk could even be the same grape that Pliny the Elder documented as Pucinum, a favorite of Livia, the wife of Augustus. Apparently, he had roads built into the Istrian Peninsula to satisfy his wife’s palate, but then again, she apparently poisoned him in 14 AD. So the story goes.

Across the border in Italy’s Friuli-Venezia Giulia, Refošk is known as Terrano, where it takes the lead in Carso Terrano DOC wines. But further to the west near Verona, the Rofosco grape family (of which Refošk is a member … follow me here) appears to be the parent of Corvina, the great Valpolicella grape that leads the charge in Amarone, Valpolicella Superiore Ripasso and Recioto della Valpolicella.

I bring all of that up, because as I enjoyed my first few sips of the Rojac Istra Refošk, my natural inclination was to search for a parallel wine. I certainly picked up a pronounced scent reminiscent of worn leather, a great nostalgic aroma that always comes to mind with Chianti and Rioja. But it was missing the bold, oak-driven tannins of both, and instead of cherries, it carried waves of dark berries and violets. Like a Valpolicella? I wrote in my notes.

Confirming later that Refošk and Corvina are indeed related grapes brought a smile to my face (maybe I’m getting good at this wine drinking thing after all!), but happily, Refošk is its own thing. I need to go back for another bottle to fully wrap my head around it.

Fortunately, its at the wine shop a few blocks away from my home. And you can find it via the link below. Tasting notes: A delightful wine that will have you adjusting your wine compass to Slovenia. Inky purple color, unfiltered and a little cloudy, but full of goodness. Aromas and flavors recall blackberry, currant, leather, violets and vanilla, with a full texture. There is a touch of sweetness to this wine, with numerous layers and surprises.

Recommended for: A wonderful fall wine. Would graciously complement a variety of roast meats, as well as earthy, mushroom-driven dishes like this recipe for Roasted Mushroom Ravioli with Thyme from the beautiful food blog Reclaiming Provincial.