The Wine Tariffs Are Real. Speak Up to Stop Them.

Get Involved to Protect American Jobs and the Wines We Love 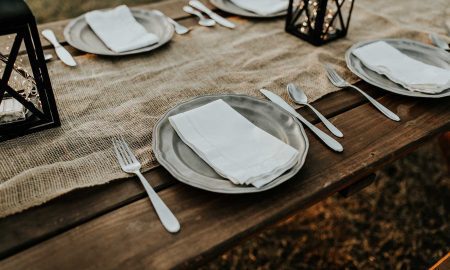 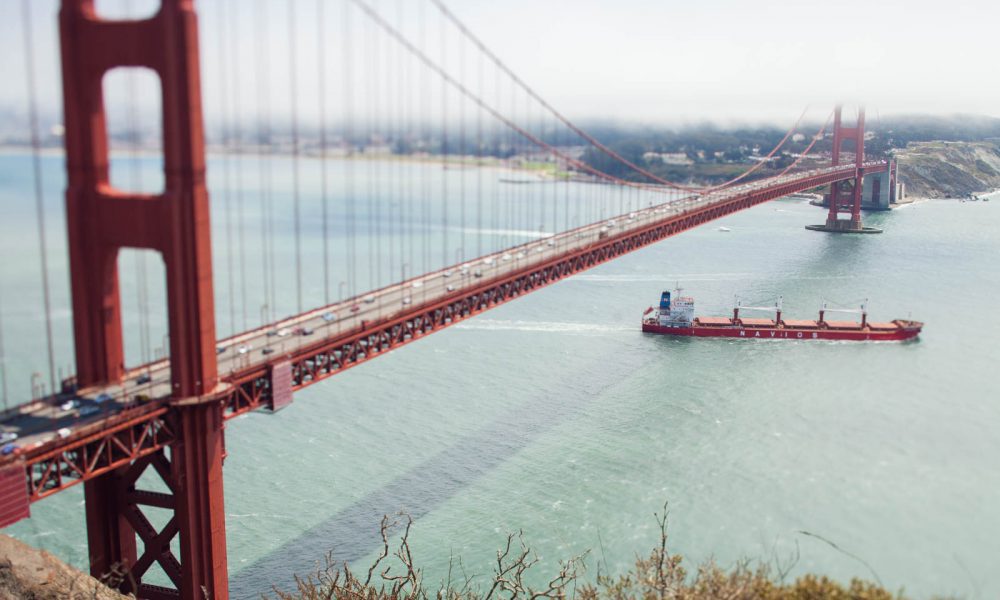 Imagine this: you go to your local wine shop to stock up. You go to the Italian wine section where the Nebbiolo Langhe you always buy now costs $42. That same producer’s Barolo is now $105. In fact, every Barolo is now three figures.

So, empty-handed, you head to Spain, which is always good for value. But when you grab a Ribera del Duero, you see it’s now $44. And you can’t bring yourself to spend $19 on the fruity, mass-produced Garnacha that’s become your weekday guilty pleasure. It’s good, but not $19 good.

How about French rosé? You’re now lucky to find one under $35.

Champagne? $75 won’t even get you a good bottle.

And lo and behold, even the California wine selection seems thinner. The distributor who brings a great selection of Sonoma Coast Pinot Noir to your state has suddenly gone belly up. They were “over-leveraged” in the world’s three largest wine producing countries — Italy, France and Spain — all of which now face 100% tariffs.

Is this the future of wine shopping in America?

If a current proposal by the Trump Administration to impose 100% tariffs on most European Union food items — including all wine — goes through, it could be. We can split hairs on what the exact price of things would be, but that actually misses the point. The more likely scenario is that once inventories are used up, these wines will simply no longer come to America at all.

That would be a tragic and self-inflicted wound to us as consumers, but it will be far more painful for American workers.

I do not doubt that the United States and Europe have some serious trade issues that need to be ironed out. I applaud anyone who wants to wade into that morass and negotiate a resolution. But this doesn’t strike me as the best way. At all.

So you know, I am a political moderate. I’ve never been inclined to do the bidding of partisans, and while I have my own passionate opinions about the way things should be with our government, this site has never been the place for it.

But this action lies at the heart of what Opening a Bottle — and the industry that inspires it — is all about. I cannot sit this one out, and if you are a Republican (or Democrat) who loves wine and a strong American workforce, I don’t think you can either.

So What Exactly is Going On?

These tariffs are being considered because Boeing and Airbus have been feuding within the WTO for over a decade on unfair business practices (namely, subsidies the EU provides to keep Airbus running). The WTO has finally sided with Boeing, which has been seen as a green light by the U.S. Government to take retribution against the European Union.

But rather than strike solely the European aviation industry, the current administration has decided to hit something much more symbolic (and less politically organized and powerful): the producers responsible for Europe’s great culinary heritage. Wine will be caught up along with cheeses, meats, olive oils, produce and whiskeys as well as other industries known for contributing to global culture, such as clothing, ceramics and art.

I suspect these industries are an easy target for our administration because, let’s be honest, (a) Trump relishes any chance to be seen as anti-elite (and what could be more elitist than wine?) and (b) these tariffs pit European Union member nations against each other. The first round of tariffs in the fall underscored this last tactic: non-sparkling wines under 14% alcohol from France, Germany, the UK and Spain were hit with a 25% tariff, but Italian wines were spared. Italian meats and cheeses, however, were not. It was as though they wanted each member nation to feel the hurt in a different way.

What Happens If This Goes Through?

But the hurt has already been felt on this side of the Atlantic, and no dose of painkiller can handle the kind of hurt that will be imposed by the 100% tariff, if it goes through.

Many of my friends are in the wine importation, distribution and retail/restaurant space here in America, and a tariff this steep will essentially shut that market down, and decimate the employment prospects of many. Here’s how the dominoes will fall.

Once there, look for the blue COMMENT button in the upper right corner

Look at the label on the last bottle of European wine that you bought, and see who imported it. Then go to their website and see how diversified their portfolio is. Many of America’s best importers have become that way because they’ve specialized and narrowed their focus to bring us the best. They have the ability to educate the American marketplace on what these wines are and why they matter, and because of that, Europe’s best producers work with them.

Even if you are not bothered by paying “a little extra” for your wine, these companies will be, and odds are, they won’t be able to make it work any more. Those wines will cease to be available. Where will they go? If I had to guess, it would most likely be China, a market that has an insatiable thirst for these wines.

And how about the people who bring the wines to market from the importers? Their business model runs on economies of scale, and so even if they have a domestic distribution portfolio as well, wines from France, Italy, Spain, Germany and Portugal account for a significant cross-section. There will undoubtedly be layoffs at such a company, or — in the case of distributors with a specialized focus — entire companies will go under.

By now, a picture of economic carnage is starting to emerge, but I think it could get worse once it rolls into restaurants and retail.

Imagine you are an Italian restaurant. You’ve built a reputation over the years for Italian-style hospitality and for being generous with your Parmigiano-Reggiano shavings on the pasta. You might even bring some of Italy’s more noteworthy winemakers to town. How do you survive 100% tariffs on the very ingredients that power your restaurant? How do you preserve your reputation for authenticity?

However, the bleakest picture could very well be your local wine shop. Retail is a brutal business, and inventory management is a not-so-glamorous but carefully balanced ballet. How is a brick-and-mortar wine shop to survive if the distributors cut back and the great importers go out of business? What can they offer that you won’t be able to find (for cheaper) at a big-box liquor mart, a grocery store, or even Amazon?

So, we’ll just buy American wine, you might suggest. They stand to gain the most from this action, right?

Not necessarily. There is good reason to believe this move will even hurt the American wine industry. Wine is seen as a “nicety” in many ways. It may seem essential to you and me, but to the broader public it is still considered a luxury. Because of this, it competes with other alcohols, not necessarily within itself, across national lines.

As a result, all wineries — American or otherwise — require a constant influx of new consumers to stay vital. Italy, France and Spain are the three largest wine producing nations in the world. Together, they account for more than 50% of the world’s wine exports. Currently, they are supremely represented in the American marketplace, and they are responsible for introducing many young wine drinkers to the joys of the drink. Without an even decent (let alone excellent) representation of these wines, the consumer base for American wineries will shrink. And that doesn’t even account for the loss of business on the export market for American wines, who will undoubtedly feel retribution.

On an intellectual level, there is more than enough evidence to oppose these tariffs because of what they will do to American jobs.

But on a personal level, I also have concern for what this will do to the many wonderful producers I’ve met in Italy and France over the years, who are already grappling with lower yields and unpredictable changes to the climate. They have already endured so much. Time and again, their love and admiration of the American wine consumer — and our savvy with wine and global cuisine — is evident when I talk to them. They want to continue selling their wine here. They would hate for these connections to be broken up, least in part because of the hard work they’ve put into educating us.

As one small example, it has taken Nebbiolo decades to earn name-recognition as a grape in this country. Barolo and Barbaresco producers did much of that by coming over here and speaking passionately about it on a one-on-one basis at restaurants and wine shops. They don’t want to take their wines elsewhere, but if it no longer adds up in America because of the 100% tariffs, they will have to. And the place they’ll likely go — as I said before — is China, where the market is insatiable and the potential for growth is enormous.

If that happens, would we ever get these wines back, even if the administration — or the next one — negotiates a deal and eventually drops the tariffs?

What You Can Do About It

Over the holidays, you will have a spare five minutes I am sure. Pour yourself a glass of Amarone and visit Regulations.gov to comment on these proposed tariffs. Click the blue “Comment Now!” button in the upper right (see below). Keep it short and concise if you have to. Any comment will go a long way.

If you are in the wine industry, be sure to address how this affects you personally. If you have to flatter Donald’s ego in doing so, go for it. I won’t judge. Sometimes you have to know your audience, and its his loyalists who need to be swayed.

Emphasize how this effort hurts American jobs. How it hurts our ability to buy what we want. How it makes us less like the America we see as our ideal. Or make a point that I’ve somehow missed. 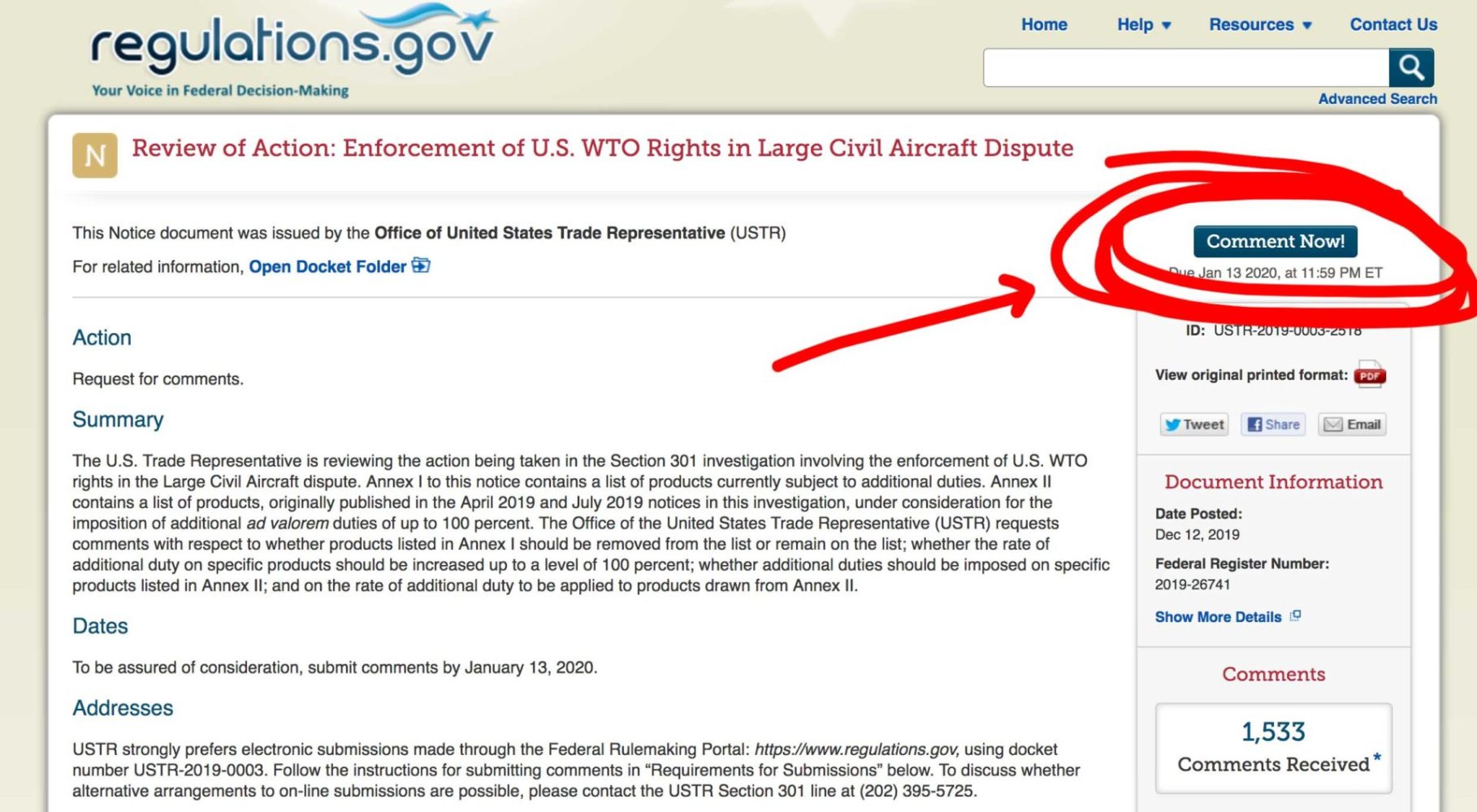 And if you are on the other side of the Atlantic, encourage your leaders to negotiate a deal to keep these industries thriving.

Yes, it’s just wine, but as you know, dear wine lover, this drink has a special power, and I’m not talking about the alcohol. Let’s preserve the American marketplace and flood the following web pages with our candid opinions. Currently, there are only 1,533 comments. That ought to be 500,000 at least.