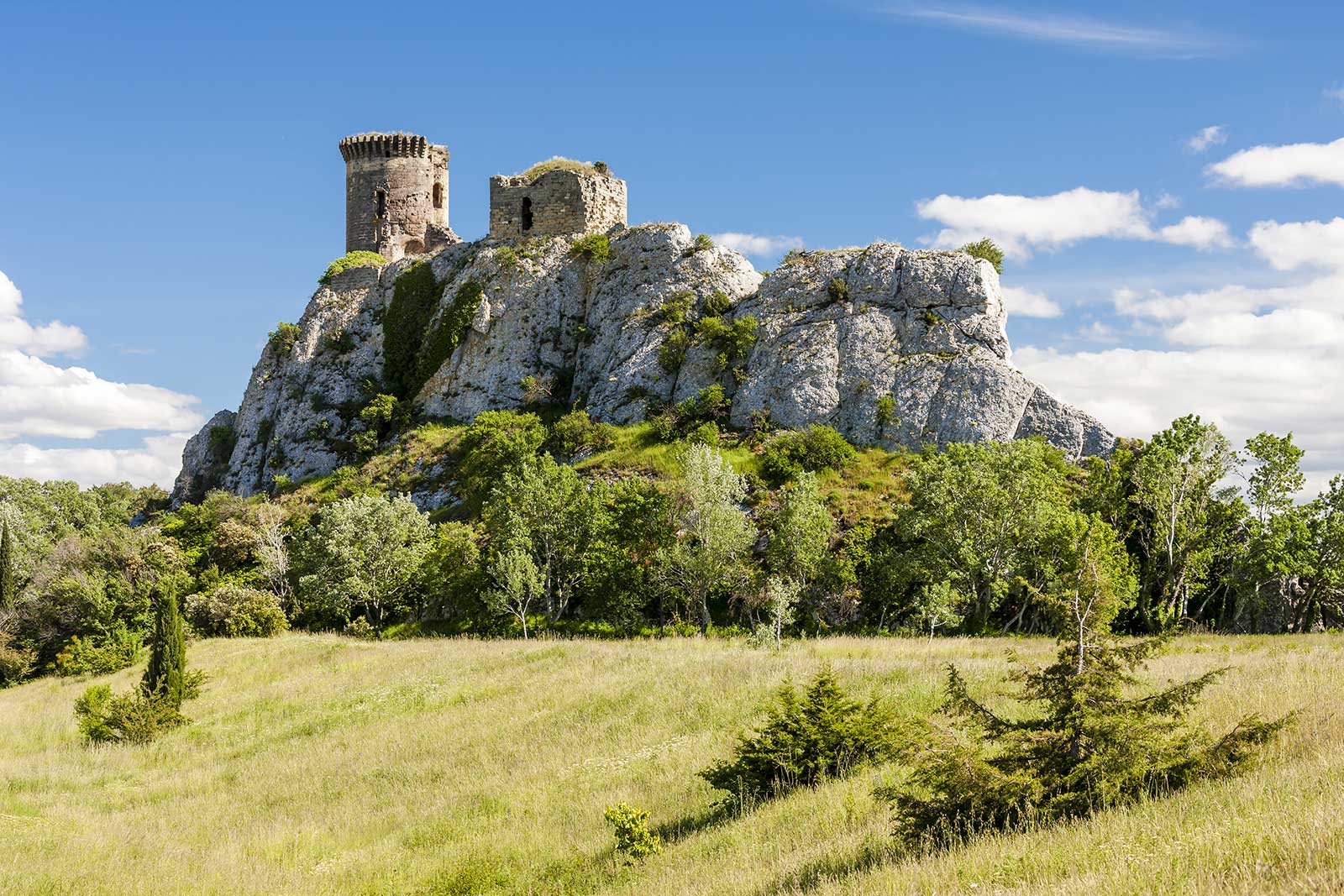 Looking for Balance in the Hot and Windy Southern Rhône 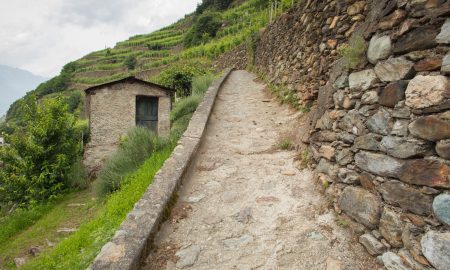 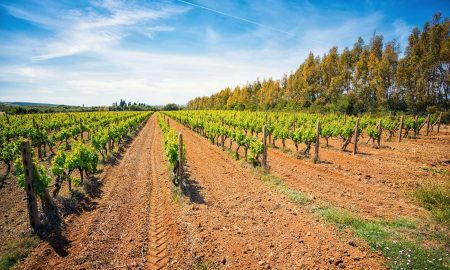 Many French wine regions swagger on the marketplace: Bordeaux struts with its stratified society of prestige wines, Burgundy waltzes with its Grand Cru, and Champagne will gladly remind you that “champagne can only come from Champagne.” With its embossed glass bottles and Gothic-font labels, the appellation of Châteauneuf-du-Pape projects its power like a bone-crushing handshake. Literally meaning the “new castle of the popes,” the wine’s pedigree is associated with a strange epoch in history in which the papacy was wrested away from Rome and placed in Avignon for 70 years. Today, the projected power of Châteauneuf-du-Pape the wine is two-fold: an often-times potent, high-octane drink backed by a voluminous history.

But is anyone impressed by a bone-crushing handshake anymore? Wines predicated on power can leave little room for interpretation or even sensory intimacy. Add prestige to the mix — a name that sells itself — and you have the potential for monolithic, unchallenged wines that rest on their laurels.

To be frank, some Châteauneuf-du-Pape wines fit that description. You could travel up into the hills for Gigondas, or select any number of Grenache-centric Languedoc or Spanish wines, and have an equally or more satisfying experience than many of the CdP I’ve tasted over the last few years.

But turn a few stones and you can still find some exquisite gems. And when you do find them, that voluminous history, that gravitas of the bottle, the tones of concentrated wind-blown fruit and bitter garrigue on the nose … it all comes together and makes sense.

For this revised First-Taste Guide, we will answer some basic but important questions: What is Châteauneuf-du-Pape? How did it come into being? Where is it headed? And which wine should I buy? 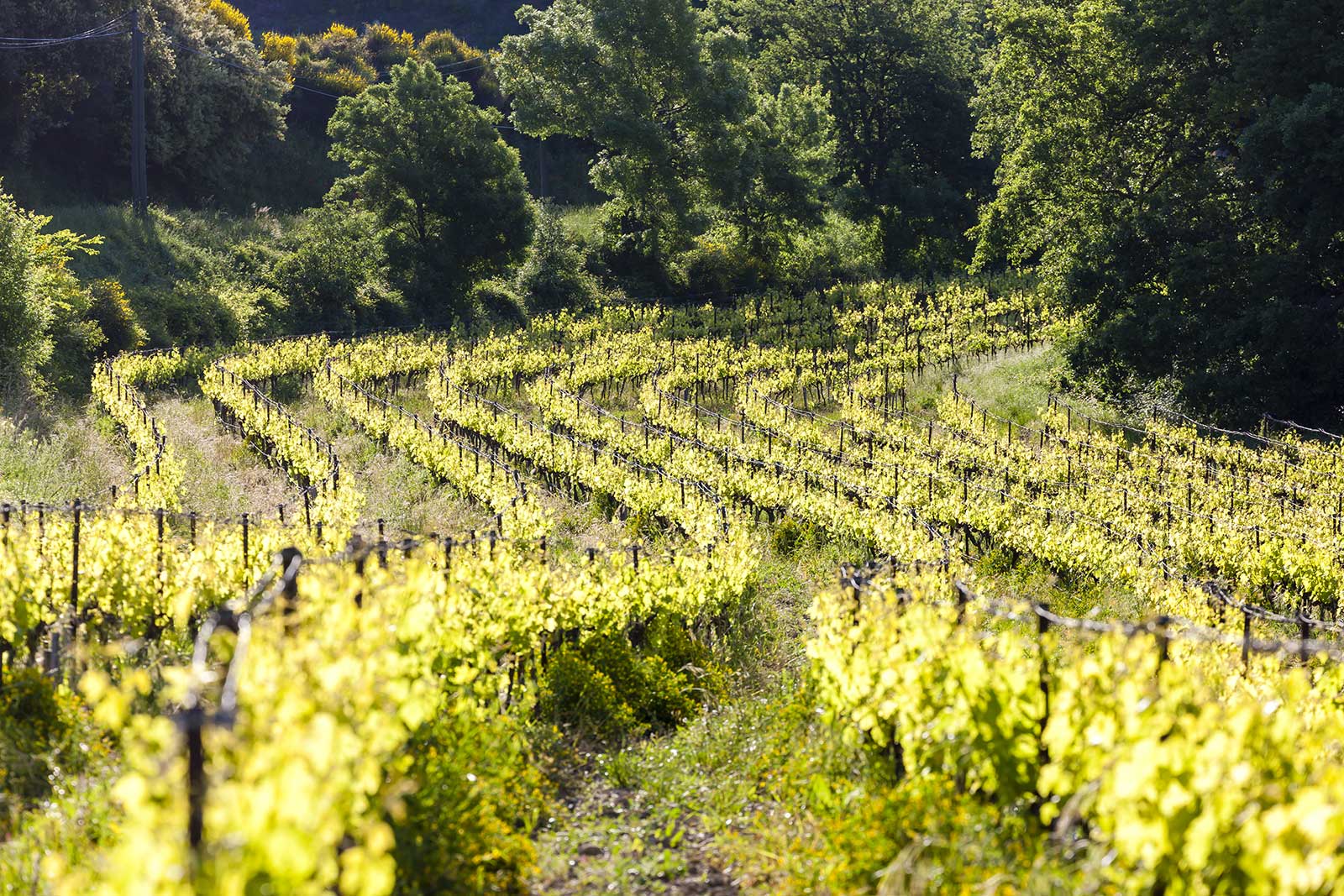 Every First-Taste Guide has included this entry. Yet I need to acknowledge this: crafting this article was a challenge, as only 3 out of 8 wines I procured merit recommendation. Given the cost of these wines, that’s an issue for this appellation. Two of the poorer wines I can attribute to imbalance from a hot climate; the other three I can point at winemaking decisions, particularly when it comes to oak usage.

But — and this is a big but — given just how good the top bottle was … well, I can see potential for further exploration of Châteauneuf-du-Pape. I hope this round of tastings was an anomaly. 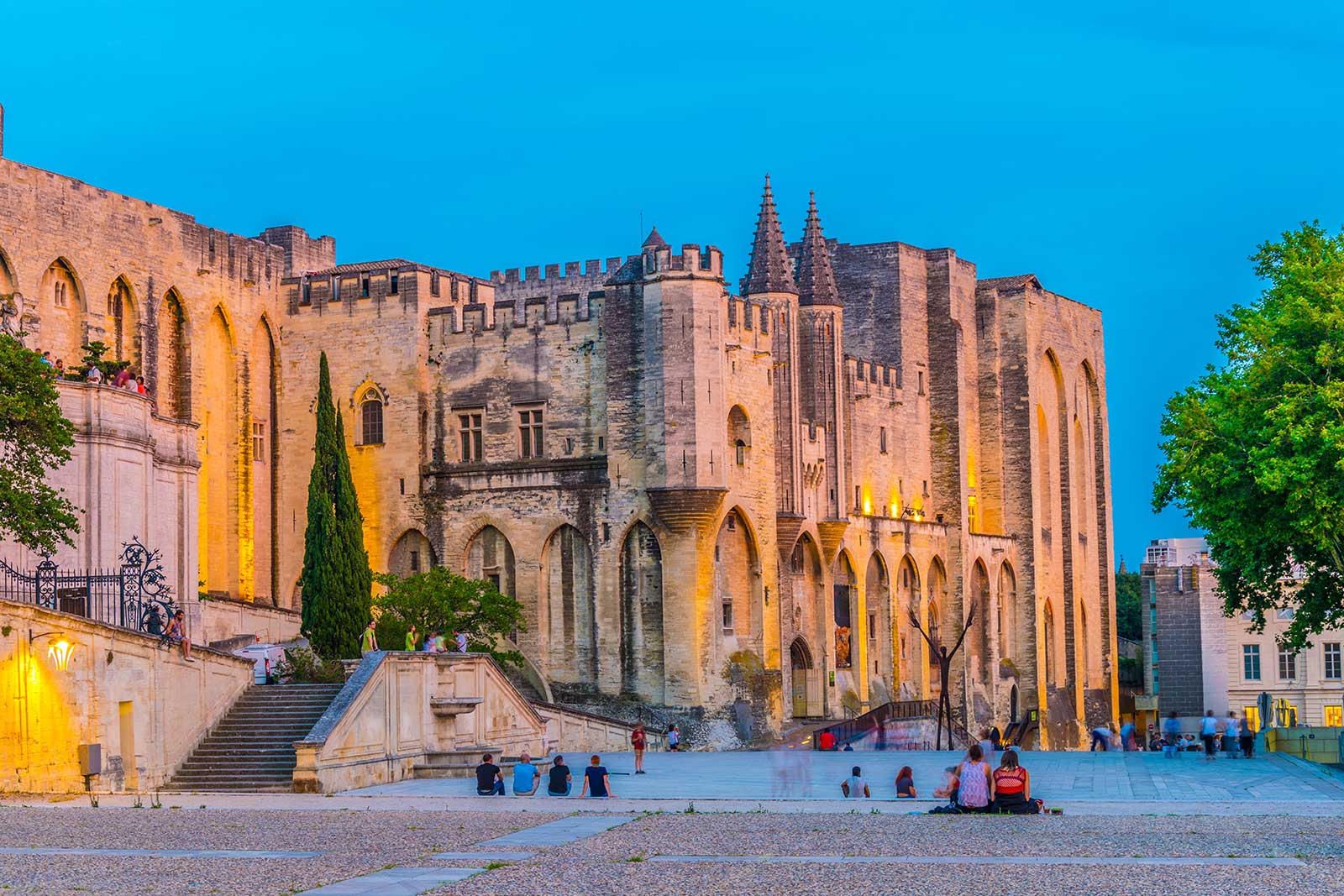 Palais des Papes in nearby Avignon is a remarkable reminder of the Avignon Papacy of 1309 to 1376.

There would be no Châteauneuf-du-Pape without the papacy. In 1308, Pope Clement V relocated the seat of power for the Roman Catholic Church and placed it in Avignon. At the time, viticulture in the southern Rhône was far from illustrious, but the establishment of the Avignon Papacy brought resources and endeavor to the area’s farms, particularly a wind-beaten plateau just north of the city. Clement V and his successors had a thing for Burgundy (some things never change), but they eventually consumed the local wine as well, especially the second Avignon Pope, John XXII. He summered in the region between Avignon and Orange, had a castle built (see where this is going?) and drank its wine, eventually promoting them as “Vin du Pape.” That action carried a certain gravitas around Europe, and Châteauneuf-du-Pape was born.

In the late 18th century, commercial success eventually followed the ravishes of the plague and — in a progressive move — Châteauneuf-du-Pape began to ship in bottles instead of barrels. But the reputation of the area also made it a target for fraud, something Châteauneuf-du-Pape has grappled with ever since.

Like nearly every wine region in Europe, the scourge of phylloxera made its mark, but in the case of Châteauneuf-du-Pape, it was early. Vines began to die from the root louse in 1866, making Châteauneuf-du-Pape one of the earliest regions to experience the pest. Many farmers fled the area, vineyards were abandoned, and it would take decades for the region to recover. However, some of those first replanted vines remain with us today. 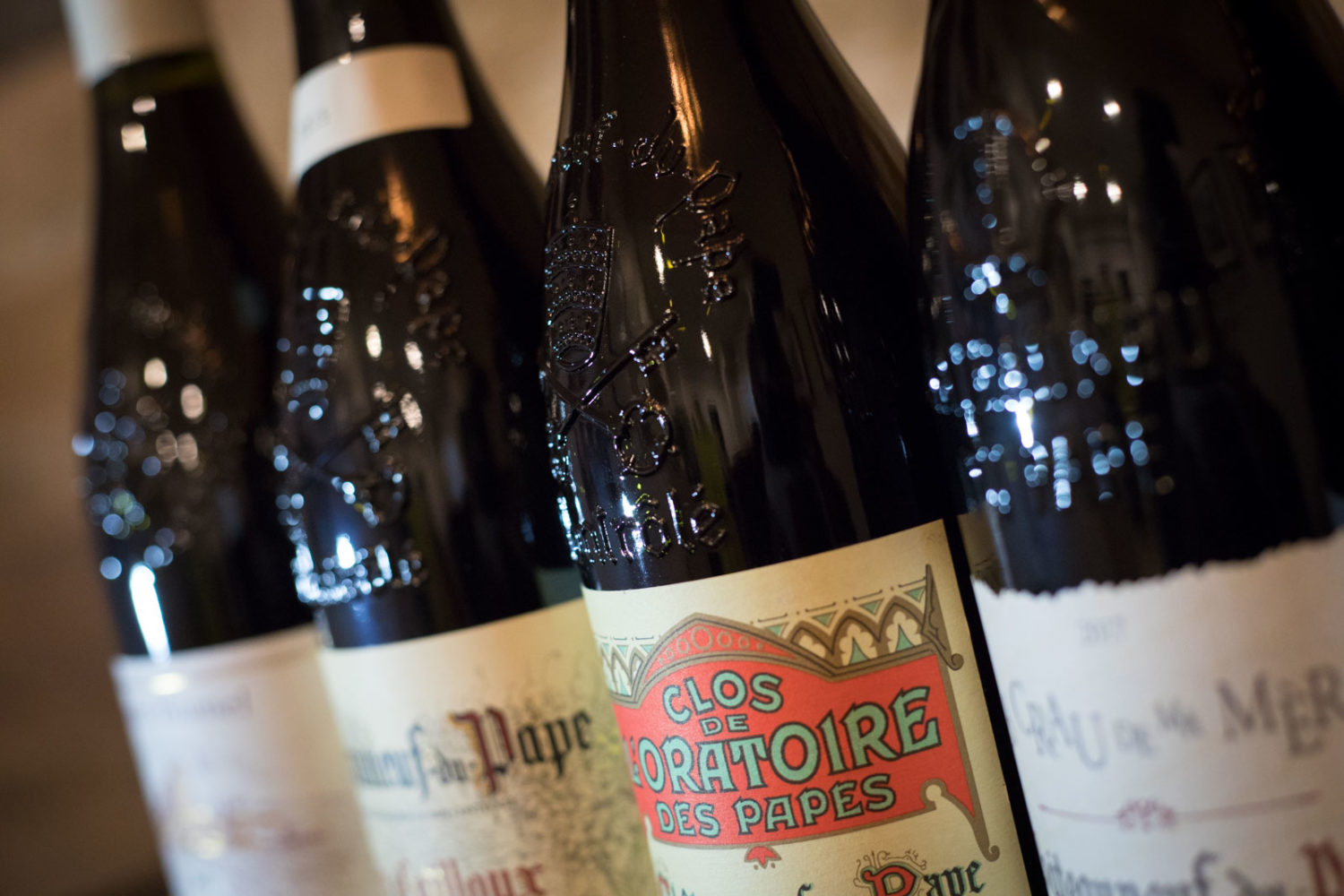 The embossed logo of Châteauneuf-du-Pape resides between the label and the neck of the bottle. ©Kevin Day/Opening a Bottle

Even with the phylloxera devastation of the late 19th century, the region continued to grapple with imposters and fraudsters. In 1894, the winegrowers banded together to begin defining exactly what Châteauneuf-du-Pape was. By 1919, geographic boundaries were established, and in 1936, Châteauneuf-du-Pape was recognized as one of the first AOC appellations by the French government. One year later, the iconic bottle of the region — featuring an embossed emblem with the papal tiara and the keys of St. Peter — was created.

Châteauneuf-du-Pape is the often considered the icon of the Southern Rhône region of France. Here, the massive Alps-fed river flows into a vast plain after traveling through the narrow passageways of the Northern Rhône. The contrast is stark. 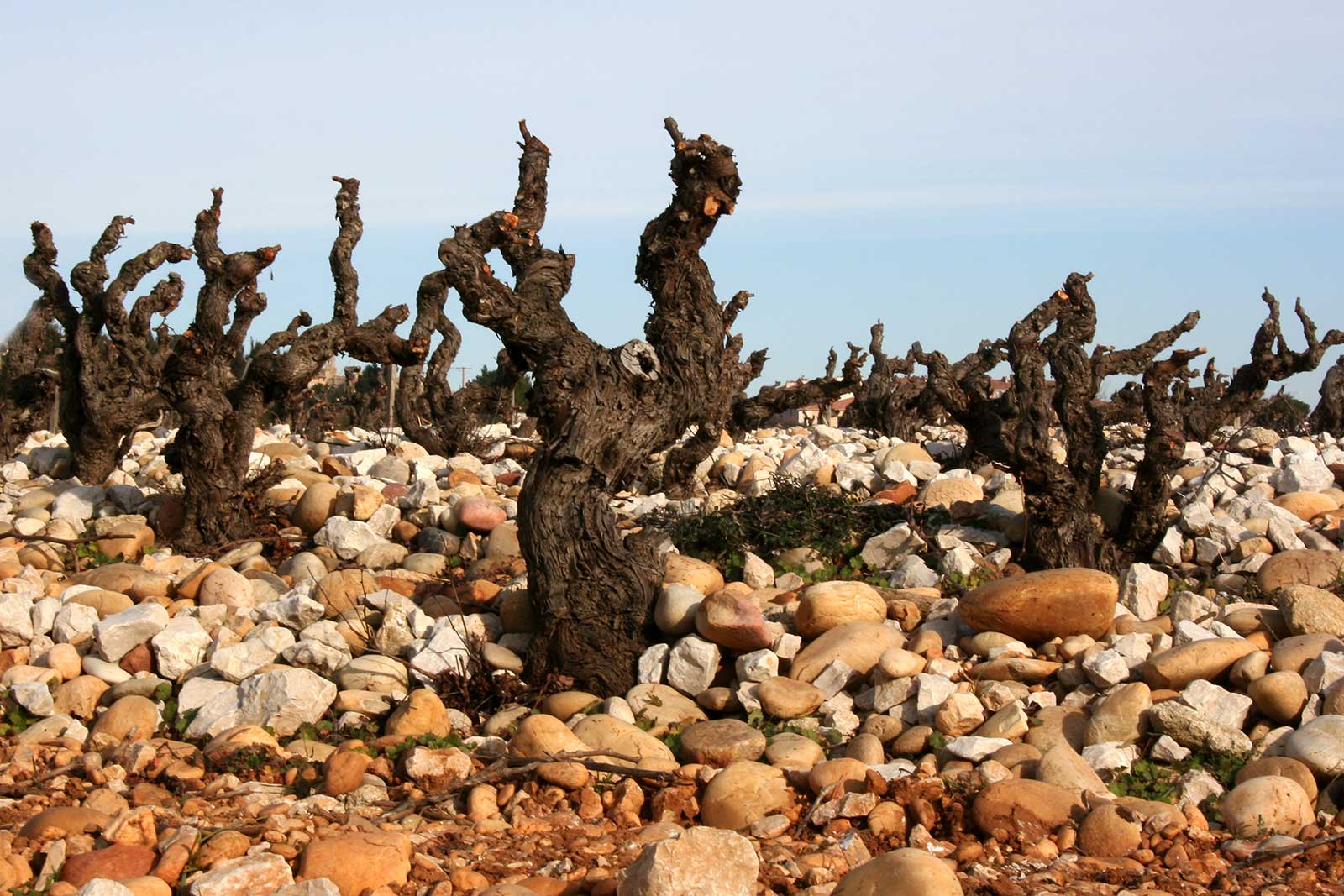 Old vines of Grenache in the galets roulés of the Châteauneuf-du-Pape AOC.

Across much of the appellation, large stones called galets roulés cover the soil like a menagerie of bowling balls. Made largely of quartzite, these stones absorb heat during the day and radiate that over night, to the benefit of the grapes. But as Rajat Parr MS and Jordan McKay note in their excellent book The Sommelier’s Atlas of Taste (highly recommended), the stones perhaps serve a more important function:

The stones’ greater function is to protect the soil underneath and to mediate the vine roots’ ability to gorge themselves on the clay. Making Châteauneuf-du-Pape agreeable for viticulture is the presence of clay over the vast limestone basement underlying the vineyards. The clay here is damp for much of the year. Since Châteauneuf-du-Pape lies right next to the river, water is constantly filtering down through its soils to the Rhône from higher lands to the east. Simply pull up some of the galets roulés, put your hand to the earth, and you’ll feel the dampness. The rocks protect these clays through the summer, allowing them to be a water source for the vines despite the punishingly hot, arid climate.

This supply of water has allowed many of the area’s vines to thrive at a slow and steady pace for more than a century. But the old vines’ twisted visage belies another key element of the terroir: the mistal. This regularly occurring northwesterly wind peaks in intensity during the winter and spring months, when even staying upright on your feet can be a challenge. But even in its mellower phases — such as when grapes are on the vine — the mistral packs a punch and makes a significant impact on the wine. That’s because it greatly reduces humidity and helps to thicken the grapes’ skin, thereby concentrating flavors. 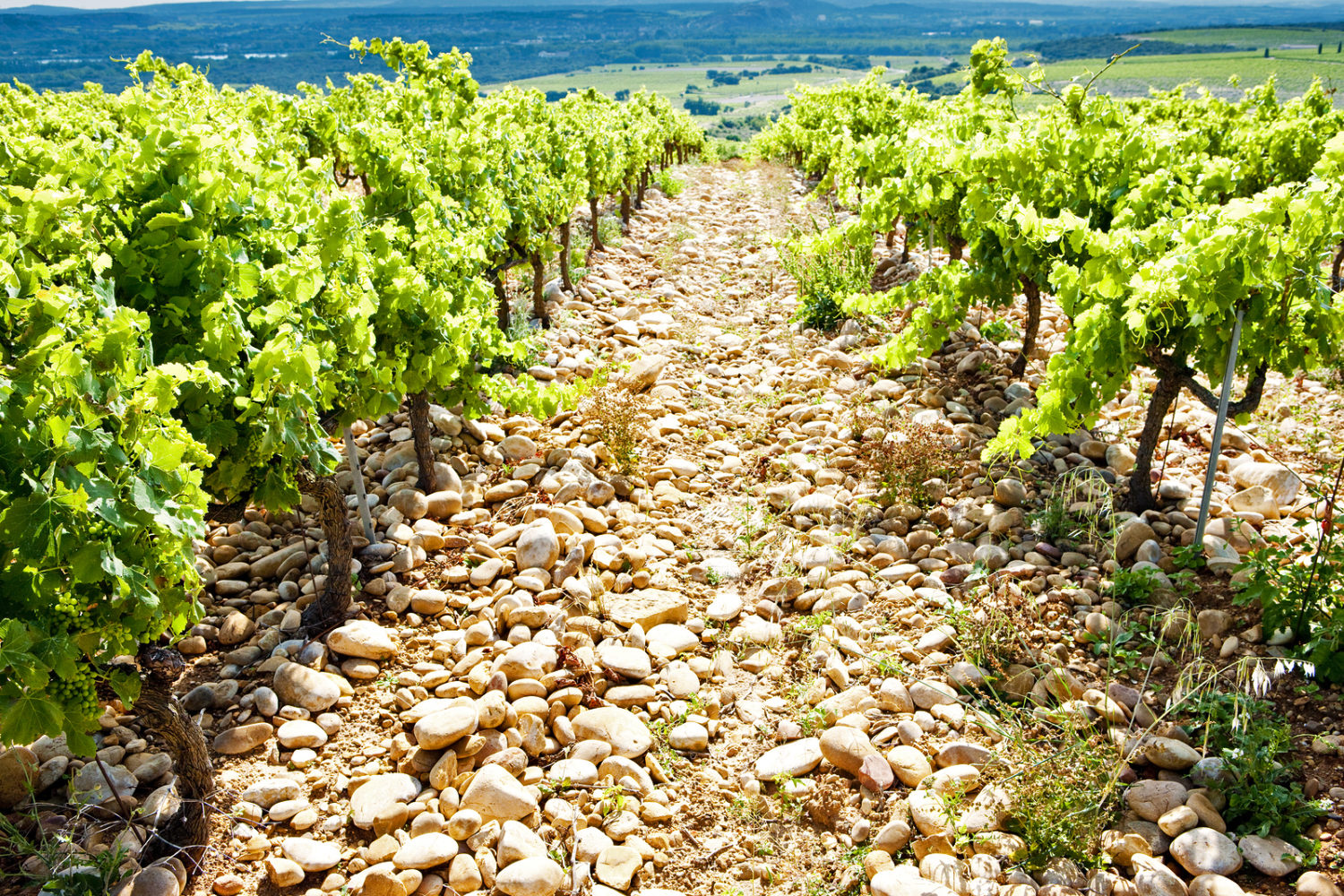 Thirteen grape varieties are sanctioned within Châteauneuf-du-Pape, but this fact — often tauted and applauded — is a little misleading.

For one, there are variants of noir, blanc, gris and rosé within those varieties, such as Grenache Noir, Grenache Blanc, Grenache Gris and Grenache Rosé. When accounted for, it leads to 22 different grape variations.

But secondly, most wines only use three or four of these grapes in their blend: Grenache, Mourvèdre, Syrah and Cinsault. Grenache is the star, but as the climate warms, it is creating problems with balance. Already prone to yielding high-alcohol wines, Grenache has been ripening more quickly in Châteauneuf-du-Pape, and in some vintages, the sugar ripeness and phenolic ripeness have not lined up. This is a major concern for the appellation, because part of what you are paying for with Châteauneuf-du-Pape is typicity. Some of the wines I sampled tasted like they could have come from any hot climate wine region in the world. 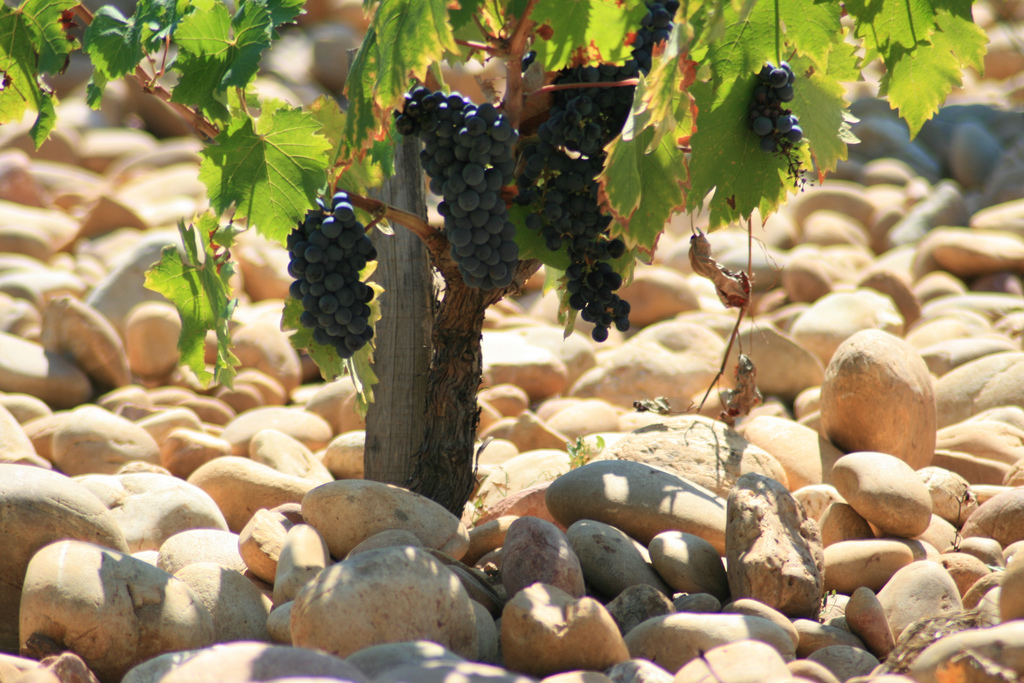 The vineyards of Châteauneuf-du-Pape are covered with round alluvial stones which radiate heat to ripen the grapes. / ©Jean-Louis Zimmerman. Flickr user, licensed via Creative Commons.

So, some winemakers are beginning to increase the percentage of other grapes — notably Mourvèdre — to counter the increasing fatness of Grenache in the blend. The original charter for the appellation — which sanctioned the 13 varieties — was prescient in this regard, as it has afforded winemakers quite a bit of leeway to get it right. Time will tell how this appellation moves forward.

Châteauneuf-du-Pape also produces a white blend, although it is considerably more rare and not as lauded. Made from primarily Grenache Blanc, Roussanne, Clairette and/or Bourboulenc, the best blancs offer a suppleness and roundless that is luxuriant on the palate, with subdued aromas of peaches, pineapple, marzipan and white flowers. Although, oak usage could stand to be a little more restrained throughout this category.

A few disclaimers: reviewing young Châteauneuf-du-Pape is akin to reviewing movies based on the trailer. These wines need significant time in bottle, and so any ranking below pertains to the pleasures they often now.

Secondly, three of the most celebrated estates in Châteauneuf-du-Pape — Château de Beaucastel, Domaine Vieux Télégraphe and Château Rayas — were either excluded from this tasting for budgetary reasons (looking at you Rayas) or I couldn’t procure a bottle in time for summer. Some might say that this guide is incomplete without the big three, and that is fair. So I’ll be amending this once I’m able to acquire a bottle or two. But even then, an appellation needs to stand on its own without a big three.

So, enough of that. Who do I recommend? 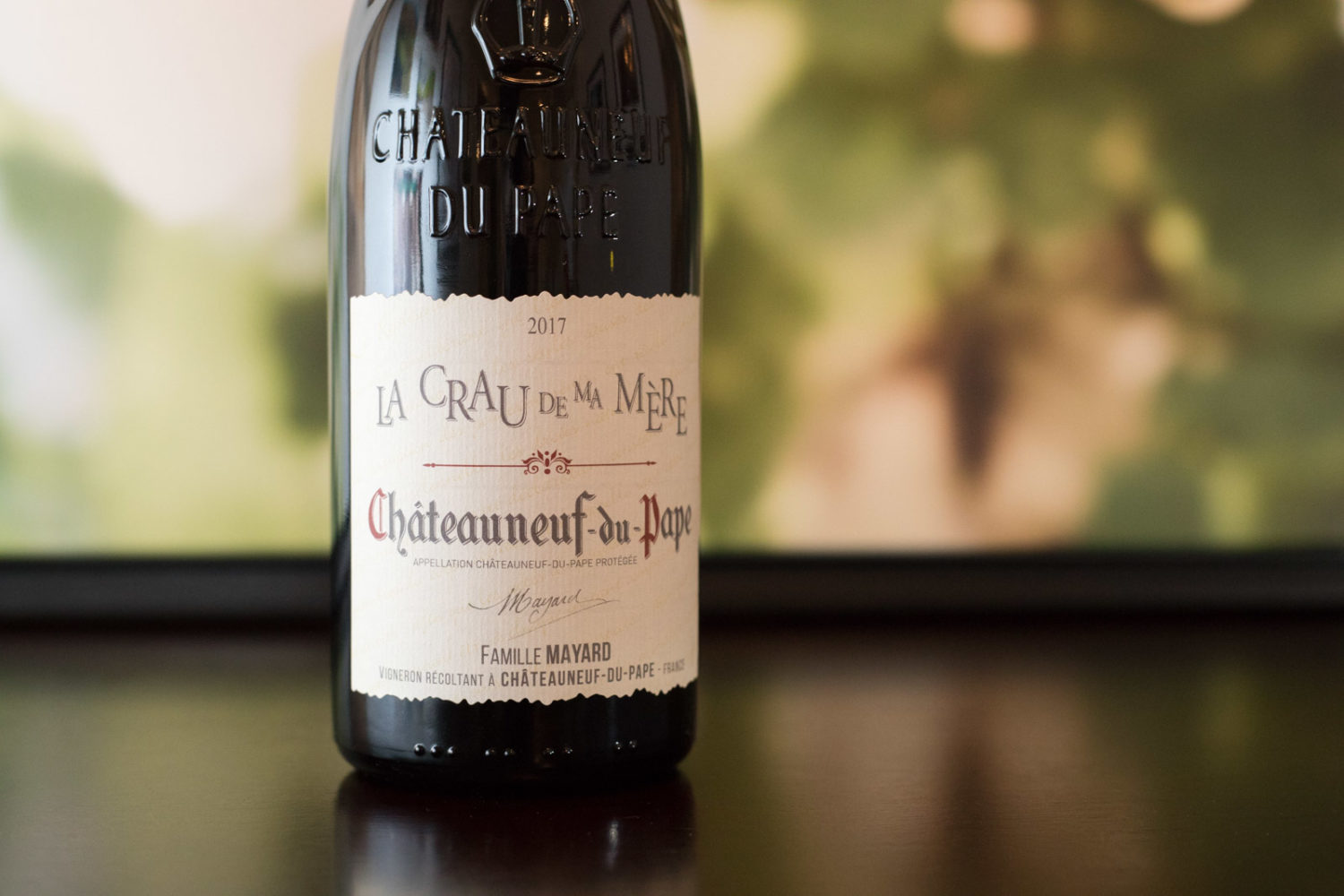 More than any other Châteauneuf-du-Pape I sampled for this story, “La Crau de ma Mère” promised a compelling future. Leaning heavily on old vine Grenache (80%, with 10% Syrah and 10% Mourvedre completing the blend), the wine’s intensity and assertion did not mask the details. This alone told me that you can have power and you can have delicacy, complexity and deliciousness. It’s just rare.

“La Crau de ma Mère” comes from one of the most prized terroir of the appellation — La Crau, a weather beaten plateau where the stones have greater depth. Strongly suggestive of blackberries, dried herbs, iris and barley (that’s a new one!), I found it to be distinctive and flirtatious on the finish. Priced around the mid-$40 range, it is an excellent value, and my top recommendation for your First Taste.

Mayard’s roots in the area go back five generations. A practicing organic estate in the process of certification, they have good reason for their gentle approach in the vineyard: their plot of centenarian Grenache vines that were tended by family matriarch, Marie Louis Mayard. She oversaw the vineyards in the 1920s, a time when women rarely, if ever, took the lead in the wine business. “La Crau de ma Mère” is named after her, and the expressive wine within is a fitting tribute. 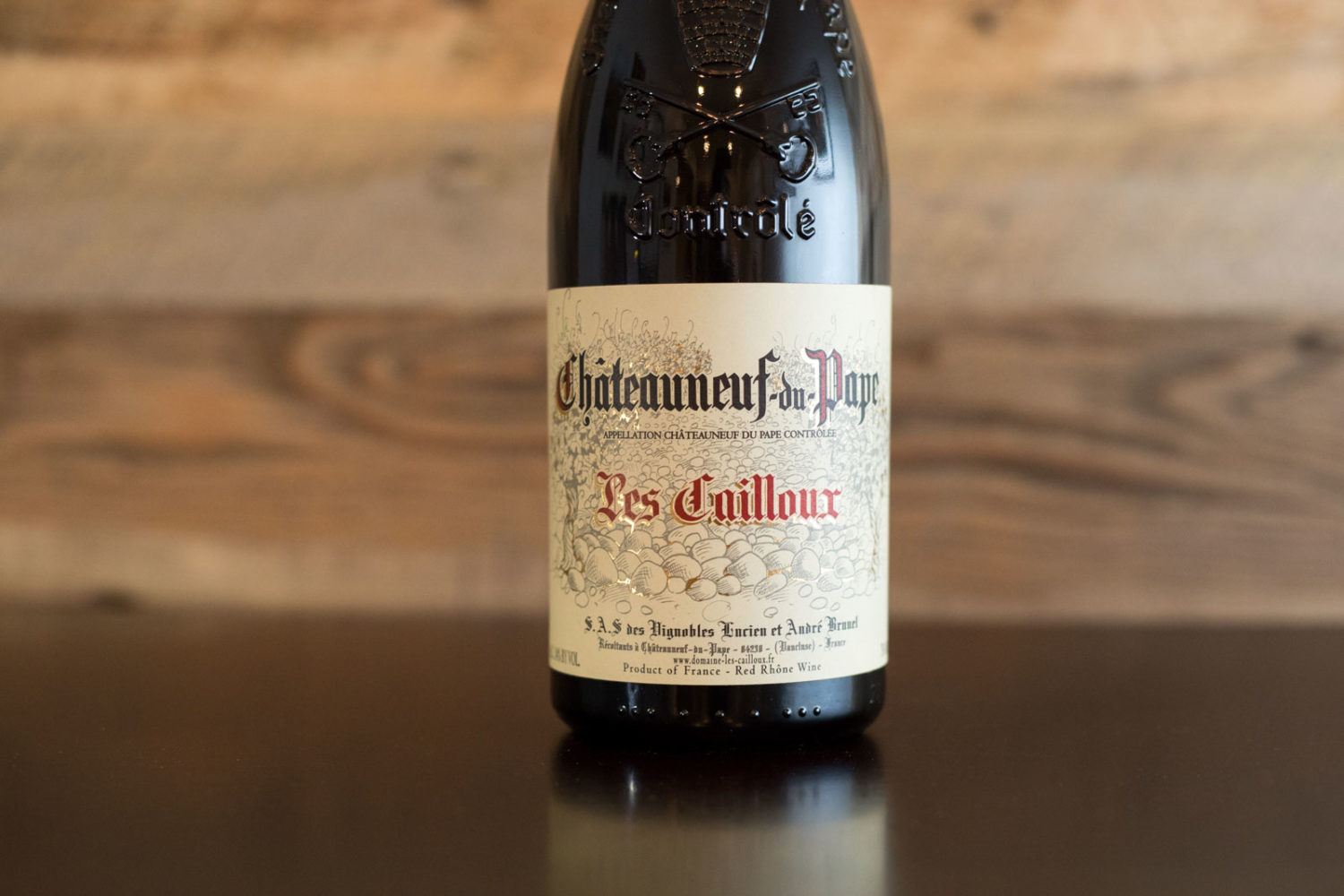 “Les Cailloux” translates as “the pebbles,” a humble-brag to the galets roulés that cover the estate’s Châteauneuf-du-Pape vineyard holdings. Boasting lovely aromas reminiscent of dried strawberries, orange peel and a smattering of herbs, the wine carries a muscular yet nimble presence on the palate. I appreciated its precise tannins and restraint, although it certainly felt a bit closed off at this stage. Give it another five years. One of the better priced bottles (around $50) from Châteauneuf-du-Pape as well. 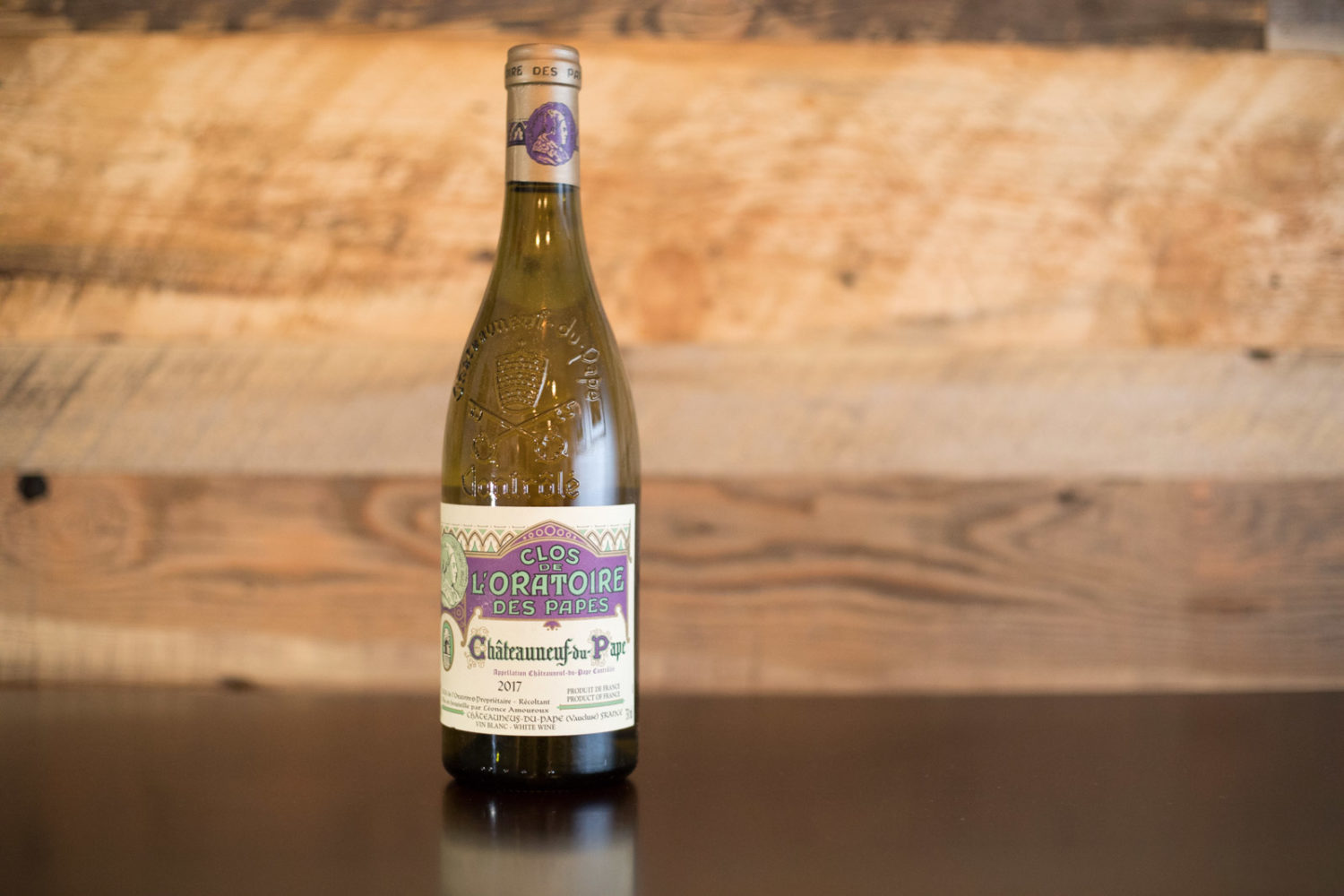 Ogier’s Clos de L’Oratoire des Papes’ blend of Roussanne, Grenache Blanc, Bourboulenc and Clairette impressed me the most in this tasting, with its dichotomy of light aromas and lavish texture. It did not have the complexity I was hoping for, but it was delicious and satisfying. If anything, the wine requires more age to come together more completely.

Note: Wines for this article were provided as samples. Learn more about my editorial policy.