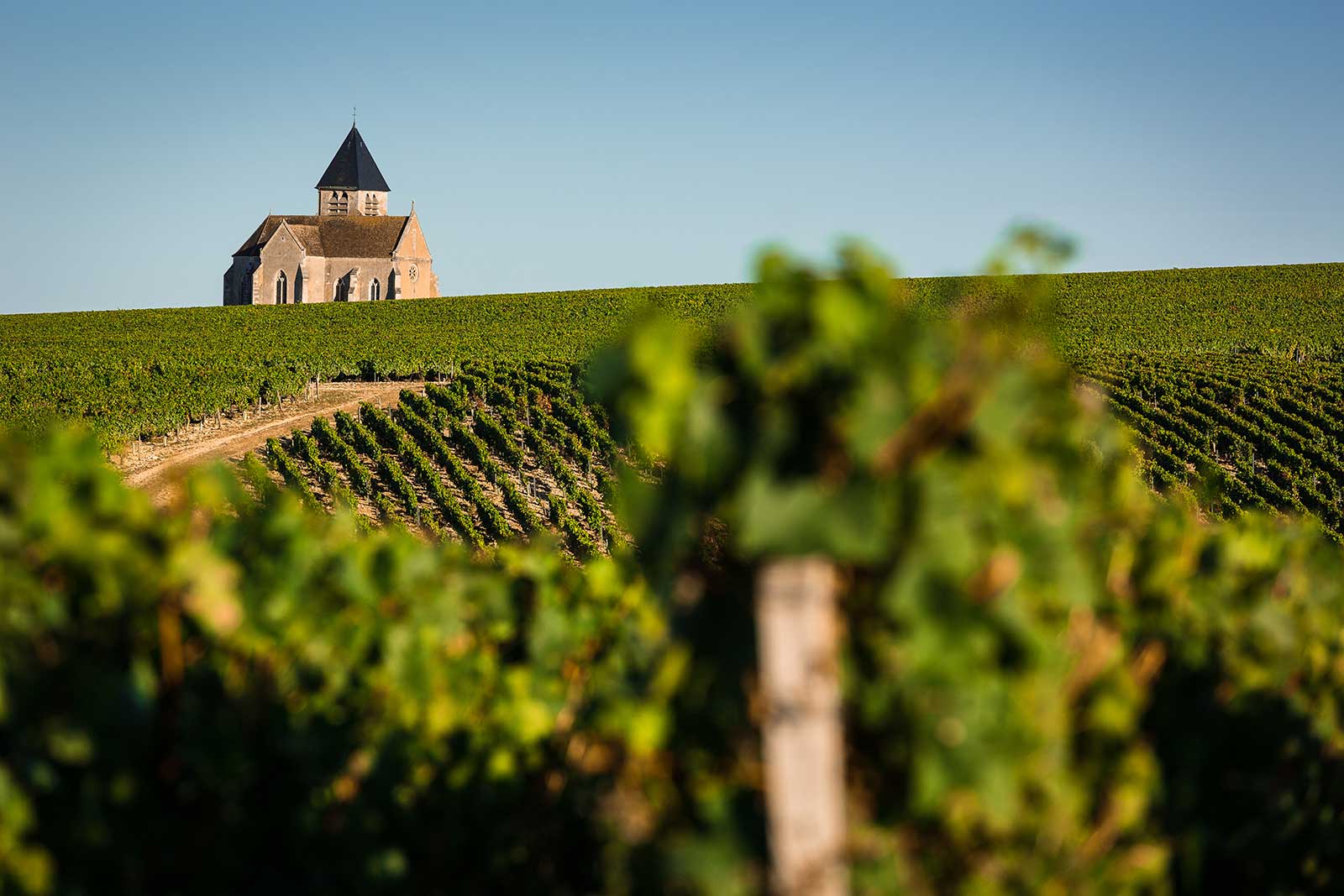 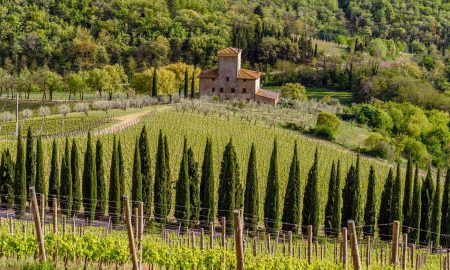 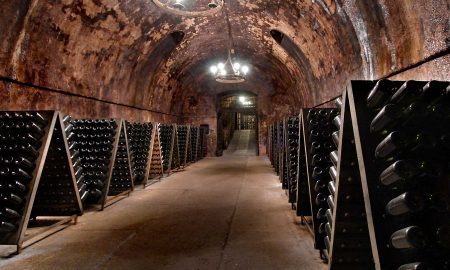 Long ago — when wine was only a dinnertime curiosity for me, rather than an obsession — I had my first taste of Chablis. I distinctly remember thinking “wow, this might be my favorite white wine.”

Fast-forward to the present day, and I still get that feeling when the right Chablis is in my glass. Of course, with experience comes awareness. Not all Chablis are equal, but few regions give Chardonnay a platform to shine as purely as it does here. Chablis’ greatness comes from a tapestry of ingredients, all equally important: ancient limestone soil, indirect sunlight from a northerly latitude, a cool climate, and of course, an entrenched, multi-generational culture of winemaking. The first three factors give Chardonnay a vivaciousness and purity; the latter lends the region an incredibly high level of consistency.

As with many of the world’s greatest wine regions, your studies can go as deep as you like with Chablis. Today, this is just an introduction. But with time, we’ll develop some vineyard stories and winemaker profiles, too, to fully illuminate Chablis’ depth. The region deserves the attention. 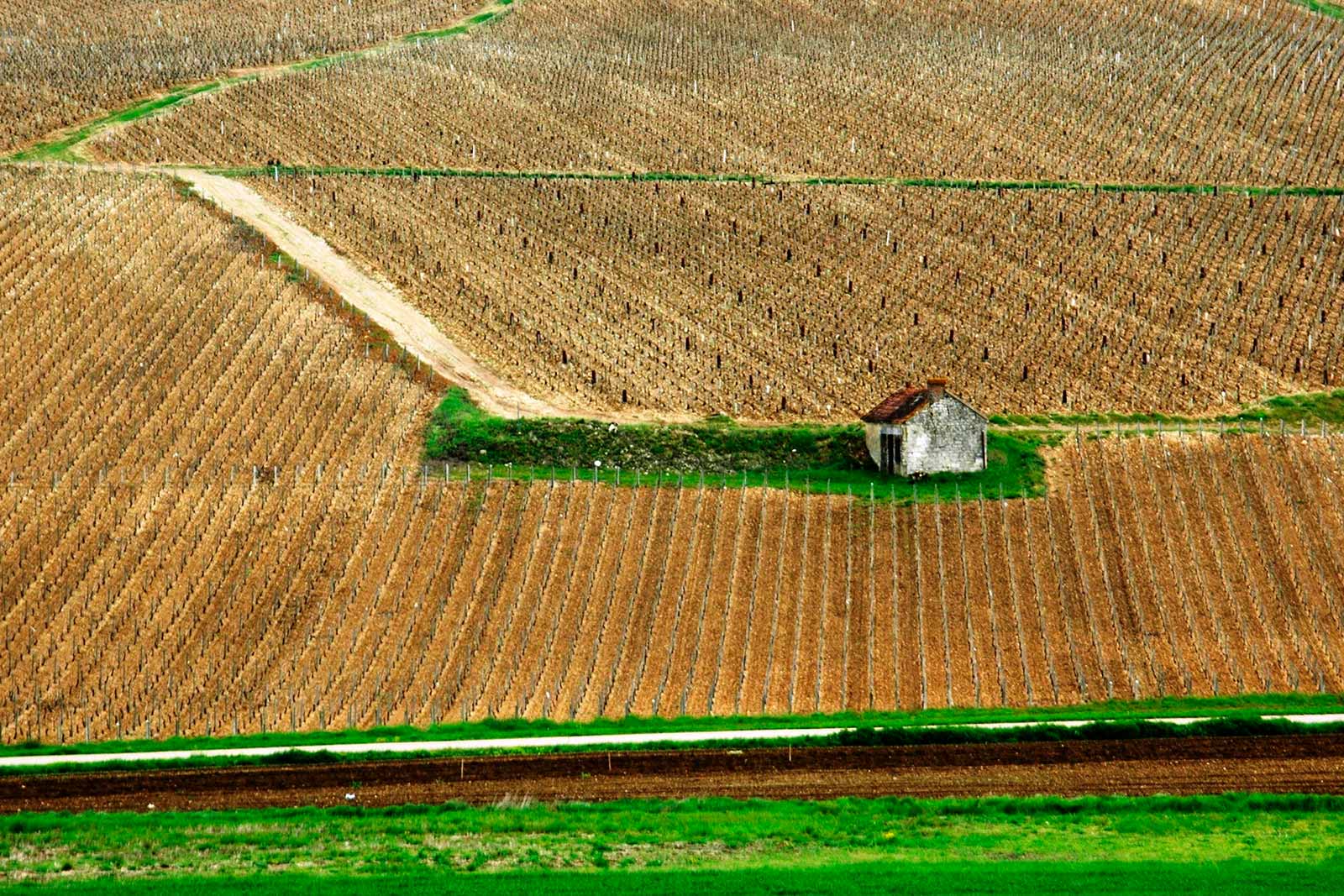 4 Reasons to Seek Out Chablis

Chablis is located in Northern France, in between the cities of Dijon and Paris. While it is part of Burgundy, it is often separated from the Burgundian conversation in a similar way as Beaujolais. This is not without reason.

Geographically, Chablis is angled away from Dijon, with its streams and rivers flowing north to the Seine rather than the Rhône. It is much further north than the Côte d’Or (let alone the Côte Chalonnaise and Pouilly-Fuissé), and as a result, the grapes need to coax as much energy as possible from the sun to ripen. This gives Chablis its characteristic acidity and lithe body.

The third difference is perhaps the most striking: Chablis’ famous Kimmeridgean limestone soil, which has more in common with Champagne and even the White Cliffs of Dover than the ruddy-colored scree of Burgundy’s heart. Rummage around in this soil and you are likely to find fossilized oyster shells, the clearest sign of Chablis’ former life as a seabed. This unique soil heavily influences the wines. Whether you claim to taste the saltiness of the sea (a bit of a stretch in my book) or you confuse it with a lean Sauvignon Blanc, the leading culprit for Chablis’ precision is the soil. 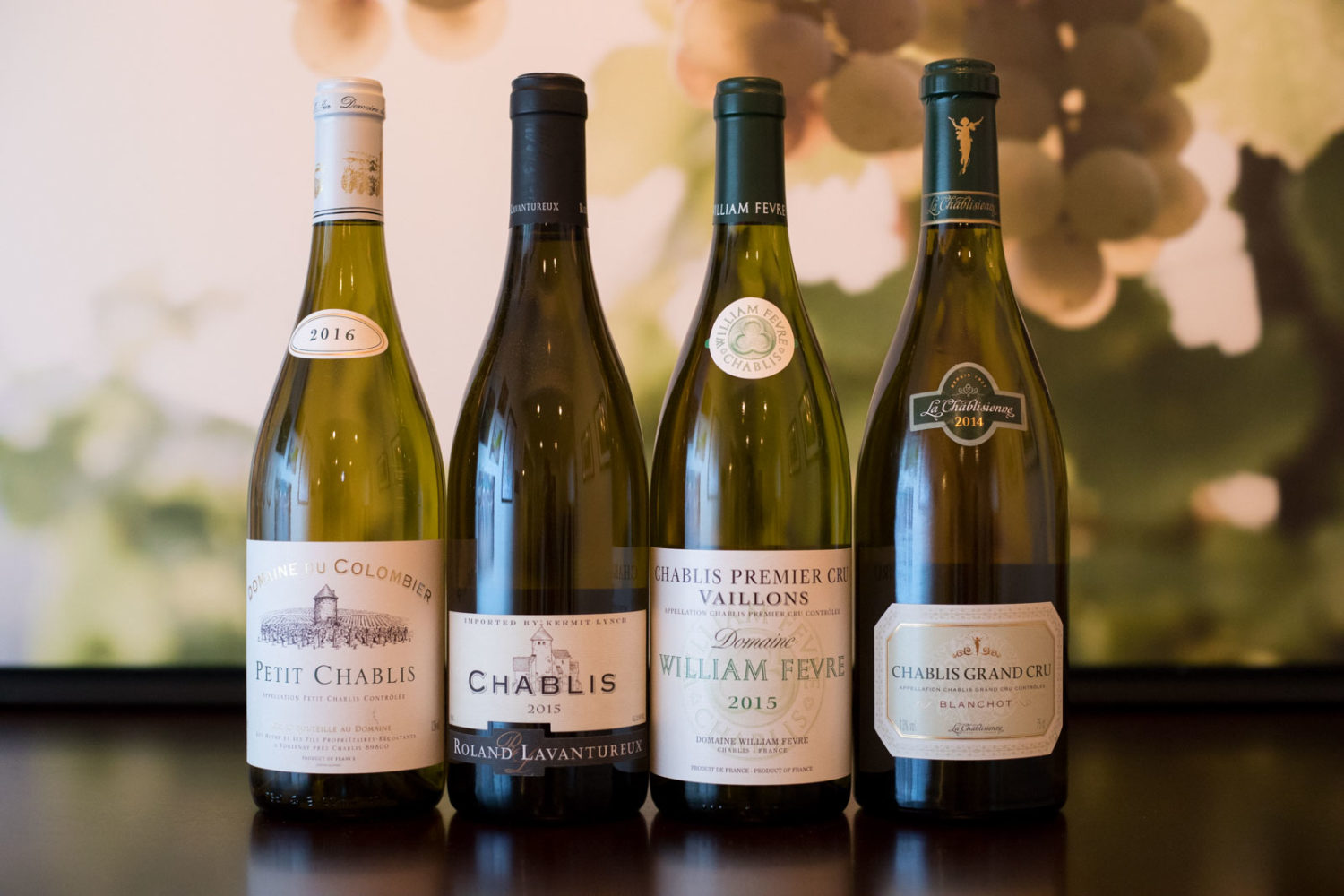 Chablis is just as terroir-obsessed as the rest of France, dividing parcels of land within the region into four tiered appellations, and then subdividing individual vineyards within the top two appellations as unique climats. How the wines are labeled depends entirely on the physical location of where the grapes came from. The tiered appellations serve as a reliable guide on quality and character and are as follows:

This is Chablis’ “village” designation — in other words, the lowest end of the quality spectrum. Grapes for this wine typically come from flatter vineyards that are mostly comprised of a different limestone soil known as Portlandian, which is younger and harder than the famous Kimmeridgean soil found on the slopes. Chardonnay’s white flowers and potential for tartness seem to be accentuated in these sites. This wine is typically the most affordable and it should be consumed young. In my opinion, it is best served in summer.

Shifting up a level on the spectrum is the largest appellation, Chablis, which accounts for 65% of the vineyard territory in the region. There is also an enormous range of quality within this designation, owing to vine age (the “Vieilles Vignes” designation denotes the oldest) and more importantly, the quality of the winemaker (more on that in a minute).

In the Chablis vineyards, you’ll often find the Jurassic-period Kimmeridgean soil that lends the wine its distinctive texture, but these vineyards differ from the next two levels based on sun-exposure. (In other words, Premier and Grand Cru vineyards have better ripening conditions). Chablis wines can be a great value, and they are highly adaptable to a range of occasions and cuisines. 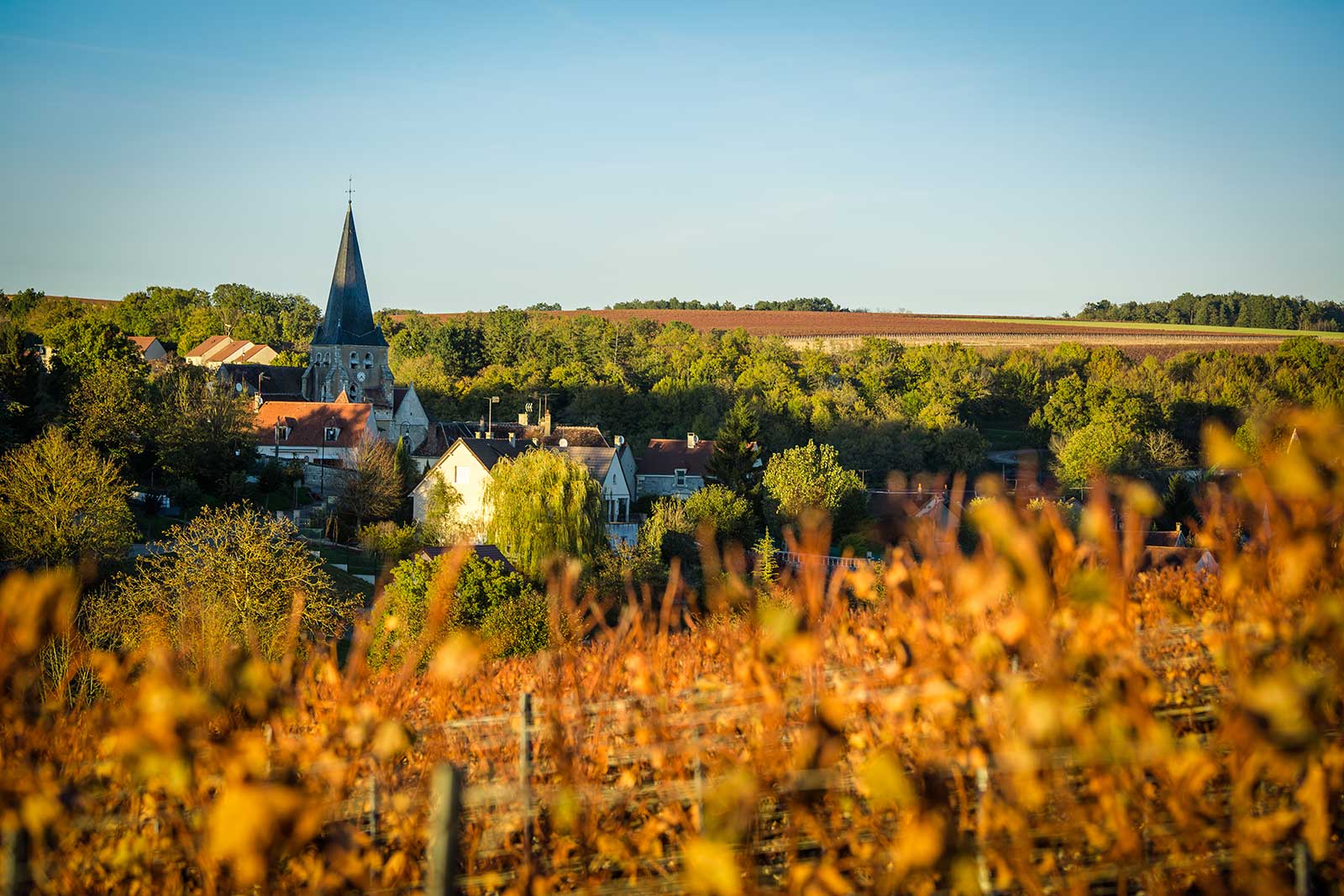 As we move up the spectrum to the Premier Cru level, we find that sun exposure, micro-climates and soil compositions are beginning to reveal the area’s complex terroir. These wines are Chablis plus a little something extra: a tinge of herbs here, a pineapple-skin aroma there, a longer-lasting finish over there. Avid Chablis drinkers will tell you that certain Premier Cru vineyards — such as the lauded Fourchaume — can yield wines of equal complexity to many Grand Cru.

For me, Premier Cru hits the sweet spot for my budget: a worthy expense given the degree of quality, character and surprising intrigue from bottle to bottle. I’ve loved wines from the Premier Cru of Côte de Léchet, Les Fourneaux, Mont de Millieu and Vaillons as well. There is fertile ground for discovery with these wines.

Finally, the crème de la crème, the Grand Cru. There are seven of these vineyards*, and they only comprise 1.8% of the total vineyard acreage in Chablis. The most noticeable difference here is the strong sense of identity. French wine aficionados often point to Chablis’ Grand Cru vineyards as a masterclass in terroir because the character from one to the next is so exact and consistent. Each wine is a tribute to the vineyard’s microclimate and a bit of intangible magic that even winemakers struggle to explain. The Grand Cru wines also face more scrupulous standards, with a higher minimum degree of alcohol and longer aging (although, we’re only talking about the Ides of March following harvest).

The Grand Cru wine featured below is truly one of the greatest white wines I’ve ever sampled.

*Note: La Moutonne is allowed to carry a Grand Cru designation but is not officially recognized by the INAO. (I’ve yet to find a definitive answer why, other than it’s between the Vaudesir and Preuses Grand Cru). 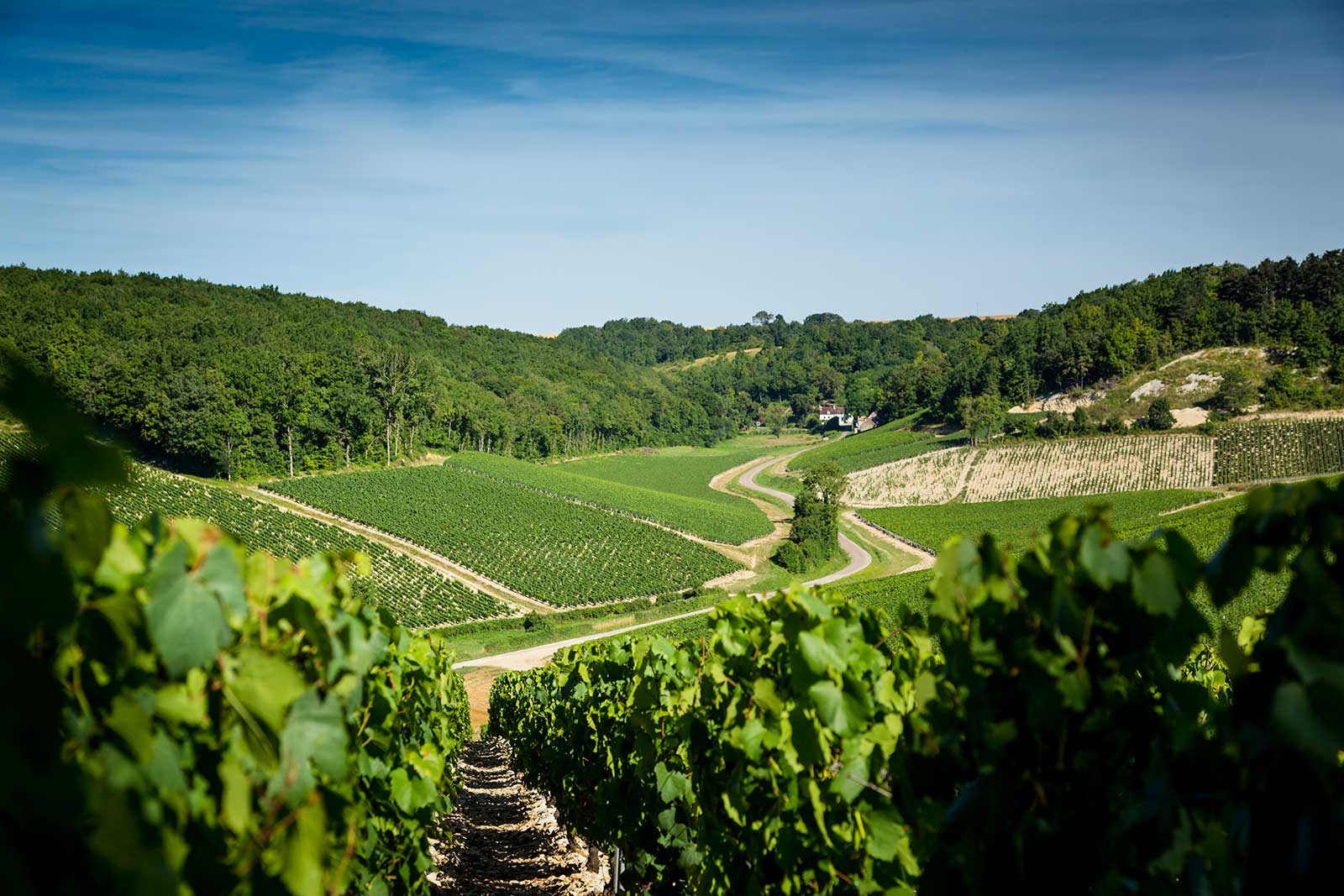 One final note on Chablis. A majority of these wines are fermented in stainless steel and bottled without the influence of oak. Chardonnay producers around the world who make “INOX” Chardonnay (as this style is sometimes called) are often seeking a similar expression as Chablis.

However, many of the best Chablis wines — particularly the Premier Cru and the Grand Cru — are fermented in aged oak barrels to give the wines textural heft. Because these barrels are older, they infuse less of the vanilla- and coconut-like notes that oak is known for. To say Chablis is an “unoaked Chardonnay” is not necessarily accurate; but to say “it is not oaky,” is.

Where to begin? Well, certainly not at the top. That’s like making the series finale of Mad Men your first episode. And I wouldn’t suggest the bottom, either. Petit Chablis wines are decent, but rarely thrilling from my experience.

The sweet spot is in the middle with the Chablis AOC bottlings that have been given a little extra care and attention, such as Domaine William Fèvre Champs Royaux Chablis (★★★★ 1/2) which sees a small 5% portion of the multi-parcel blend in neutral oak, or Domaine Savary’s Sélection Vielles Vignes Chablis (★★★★ 1/2) which comes from old vines. The Roland Lavantureux Chablis (profiled below in greater depth) is also a nice option. 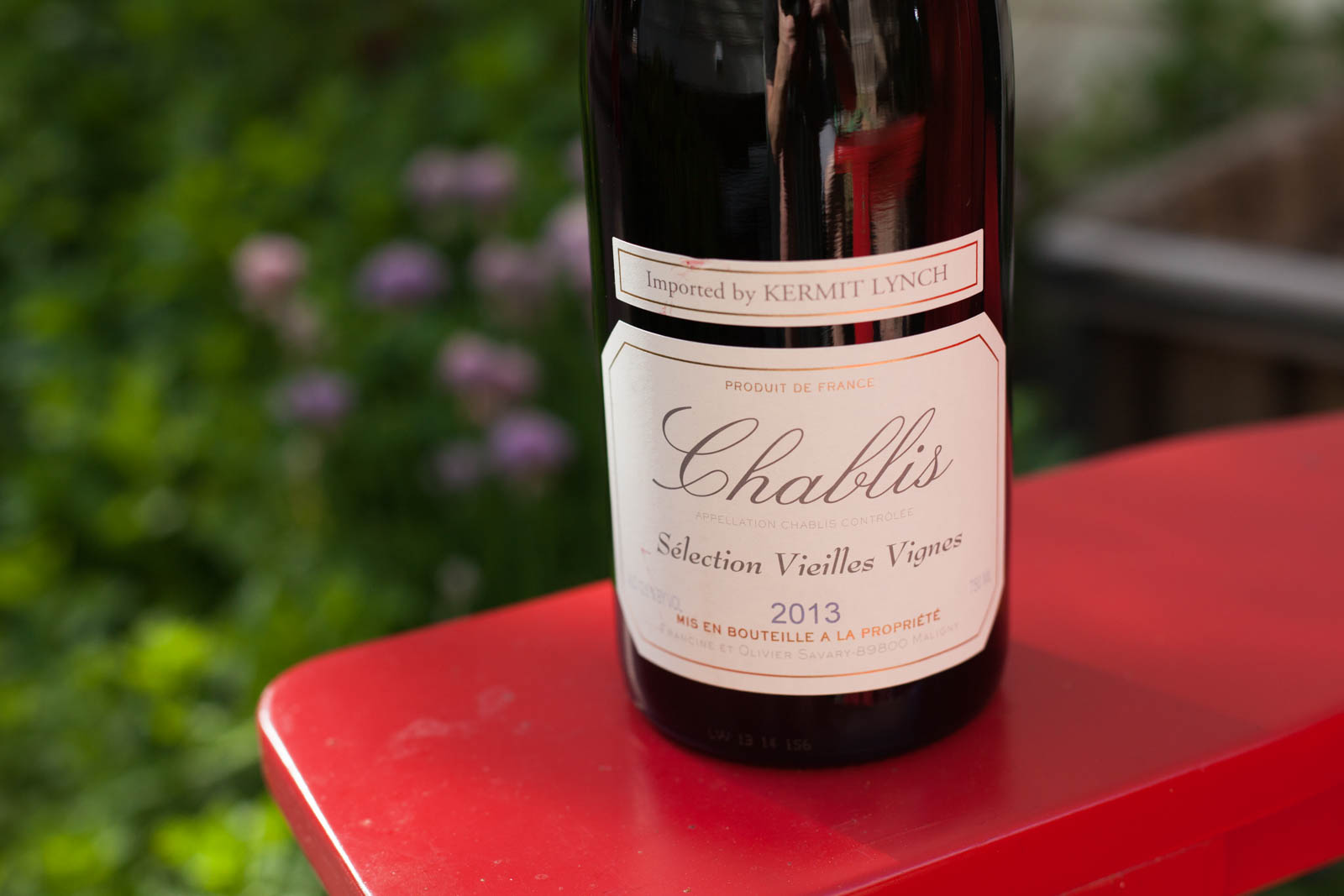 But then I would suggest that you have a Chablis Premier Cru available for a comparison taste. The Paul Nicolle Chablis Premier Cru Mont de Milieu (★★★★ 3/4) combines Chablis’ signature texture and white-flower and crisp-apple aromas with a little more citric depth. Domaine William Fèvre Chablis Premier Cru Vaillons (see below) is an exquisite example of how Chablis can push the limits on Chardonnay. Once this homework is done, you’ll have a sense for Chablis’ identity as a wine, and then you can give yourself permission to head for the Grand Cru wines (see below for my recommendation).

If you can’t find these specific wines, no worries. The level of quality among Chablis producers is very, very high. From my experience, noteworthy winemakers to look for include the aforementioned (Paul Nicolle, Domaine Savary, Roland Lavantureux and the ubiquitous Domaine William Fèvre), as well as Domaine Bernard Defaix (an Essential Winemaker of France), Domaine Laroche and the high-quality co-op that accounts for nearly 1/3 of all Chablis wine, La Chablisienne. Domaine François Raveneau is likely the most acclaimed Chablis producer, but I have yet to sample the domaine’s wines.

Chablis’ refinement and clarity make it entirely unique within the world of Chardonnay. I hope you find these wines as satisfying and divine as I do. 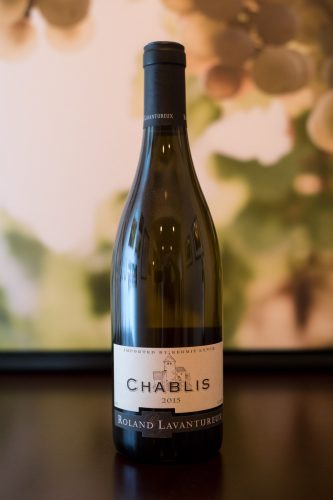 Tasting notes: My immediate impression of this wine was the complexity of its texture. It was rounded yet lean, energetic and a little bit tart, but the finish carried longer than I expected. This same complexity is not found in the aromas or flavors — nope, there’s the standard Chablis Show of crisp green apples, white flowers and cut of citrus — but the wine is so sprightly and alive, I didn’t find myself searching for more. Retailing for $25, this wine feels a little bit on the pricey side of things, but I’d still get it if there was room in my shopping cart. (Sampled in September).

Serving suggestion: Pair with grilled fish and spring vegetables. Throw in some risotto for an added complement. 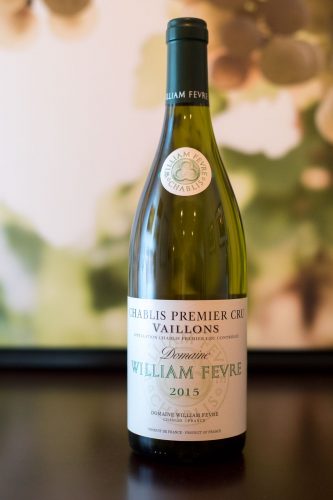 Tasting notes: This Chablis Premier Cru comes from the largest owner of Premier and Grand Cru vineyards in Chablis: Domaine William Fèvre. It is an impeccable wine, and proof that many Premier Cru wines can rival the Grand Cru in Chablis. The aromas were rich and morphed frequently over the course of the bottle, recalling at times golden apple, coconut, lime pith, butterscotch and fresh-cut hay. If that sounds more like Côte de Beaune in its description, just know that the lime-like citrus, the distinctive texture and the minerality on the finish kept me rooted in Chablis. Rounded, elegant, almost creamy and long on the finish, I thought this wine was simply beautiful. I docked it a quarter star because it was diminished on a second night, so don’t hesitate to empty the bottle on night one. (Sampled in September).

Serving suggestion: This wine could support a variety of cuisines, but the simplest may be the best: a roasted chicken with potatoes and autumn vegetables. 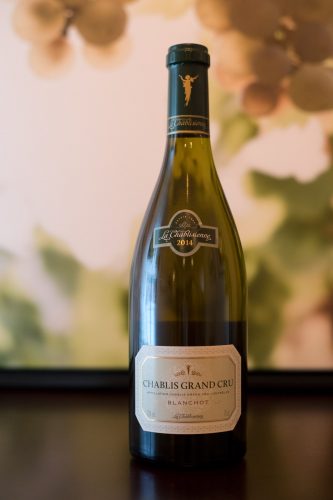 The wine is precise, evocative, complex, refreshing, delicious and impeccably versatile. I can’t say enough about it. Massive aromas suggested crisp apples, fresh thyme, honeycomb, the slightest grapefruit zest, and a bit of creme brûlée from the oak-barrel fermentation. “Smells like something a bumblebee would love,” I wrote in my notes. The creamy texture suggested a bit of malolactic fermentation occurred, yet the wine was paradoxically light as a feather yet strong in personality. Float like a butterfly, sting like a bee. The long finish made me want more. (Sampled in December).

Suggested pairing: Served with an old-school recipe of coquille St.-Jacque on a cold Christmas Eve night. One of the most divine food-wine pairings of my life, as the wine’s herbaceousness, creamy texture yet acidic bite was the perfect counterweight to the indulgent scallop dish.

Wineries Mentioned in This Article 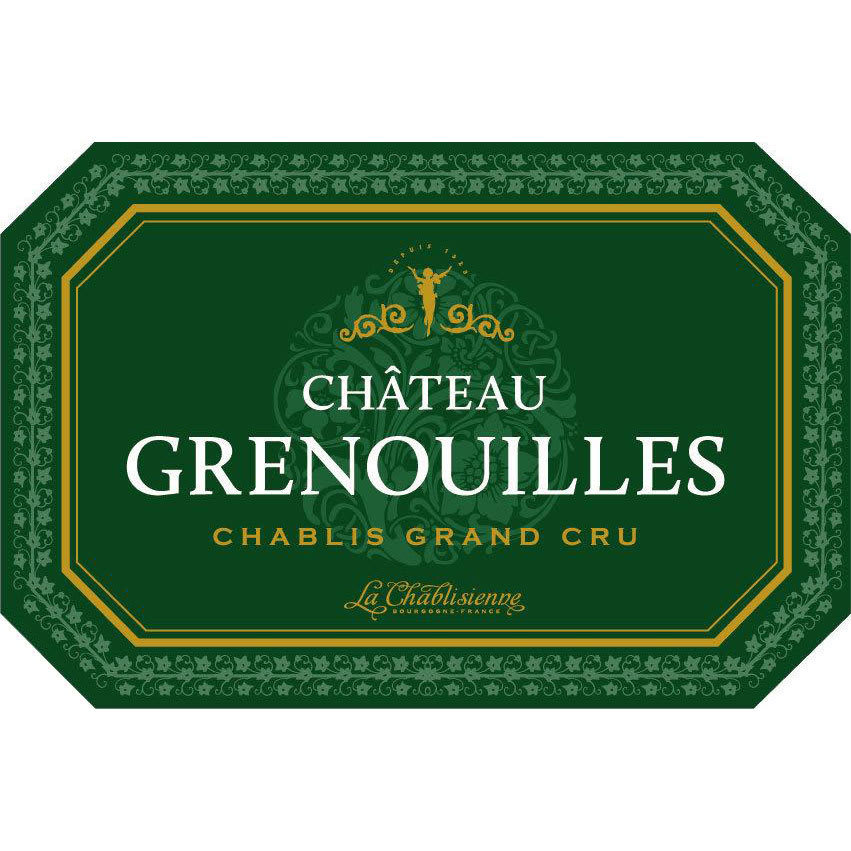 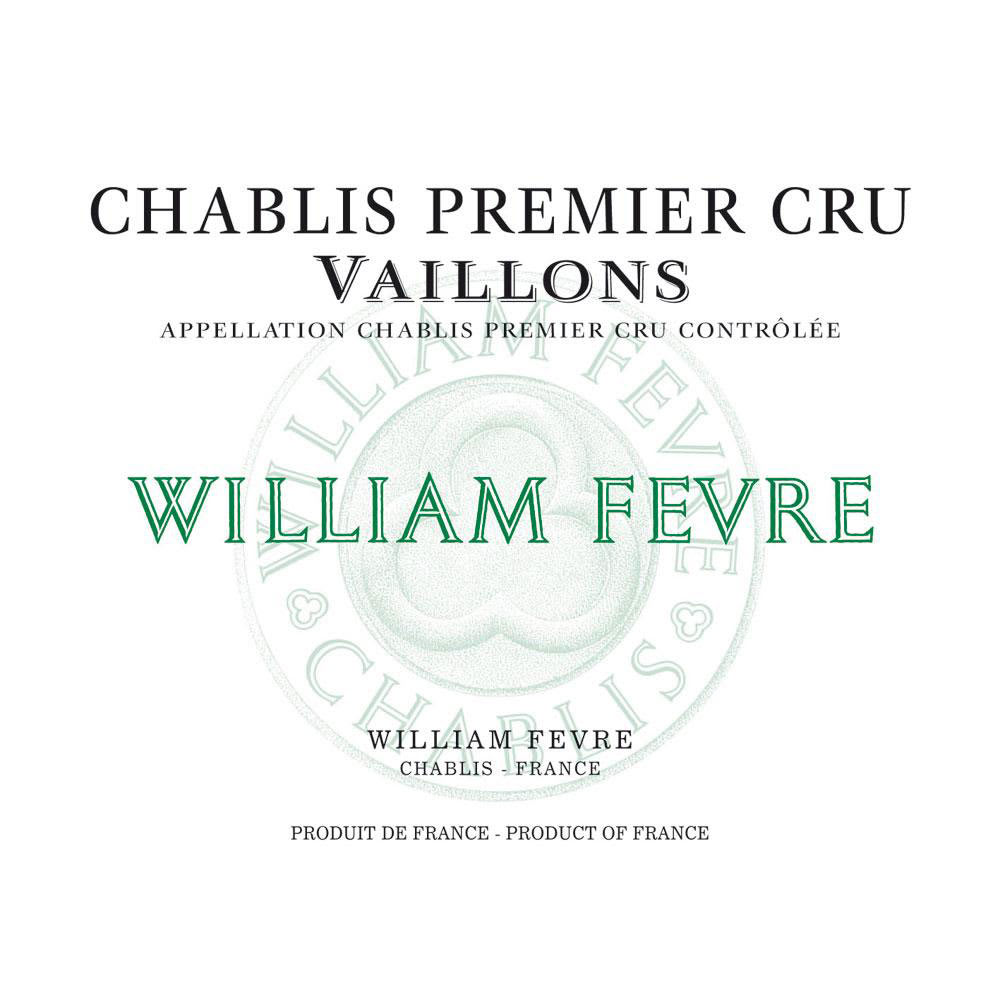 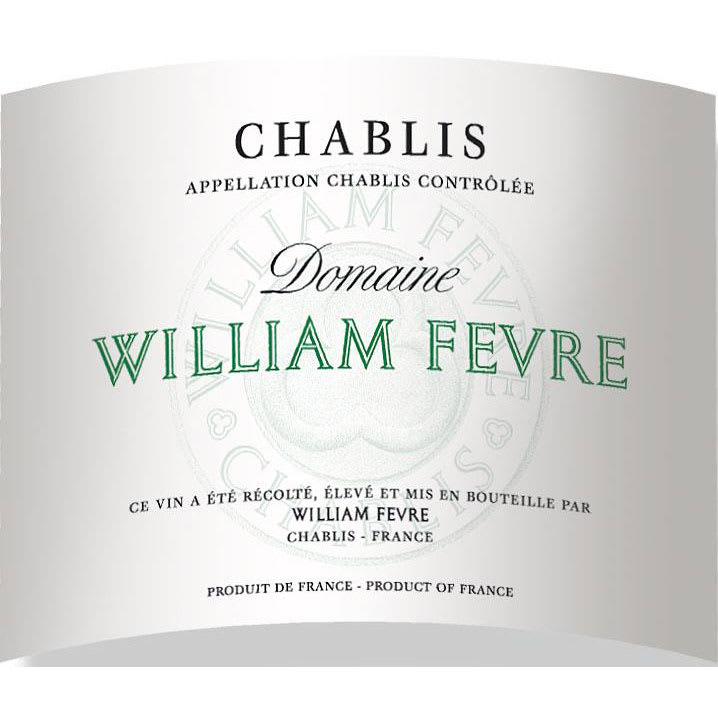 Note: The three wines featured in this article were provided as samples from Bureau Interprofessionel des Vins de Bourgogne (BIVB). A fourth wine they provided — a Petit Chablis — was left out of this article. Wines mentioned earlier were personally purchased. The BIVB was graciousness enough to include photos upon my request. Learn more about my editorial policy.