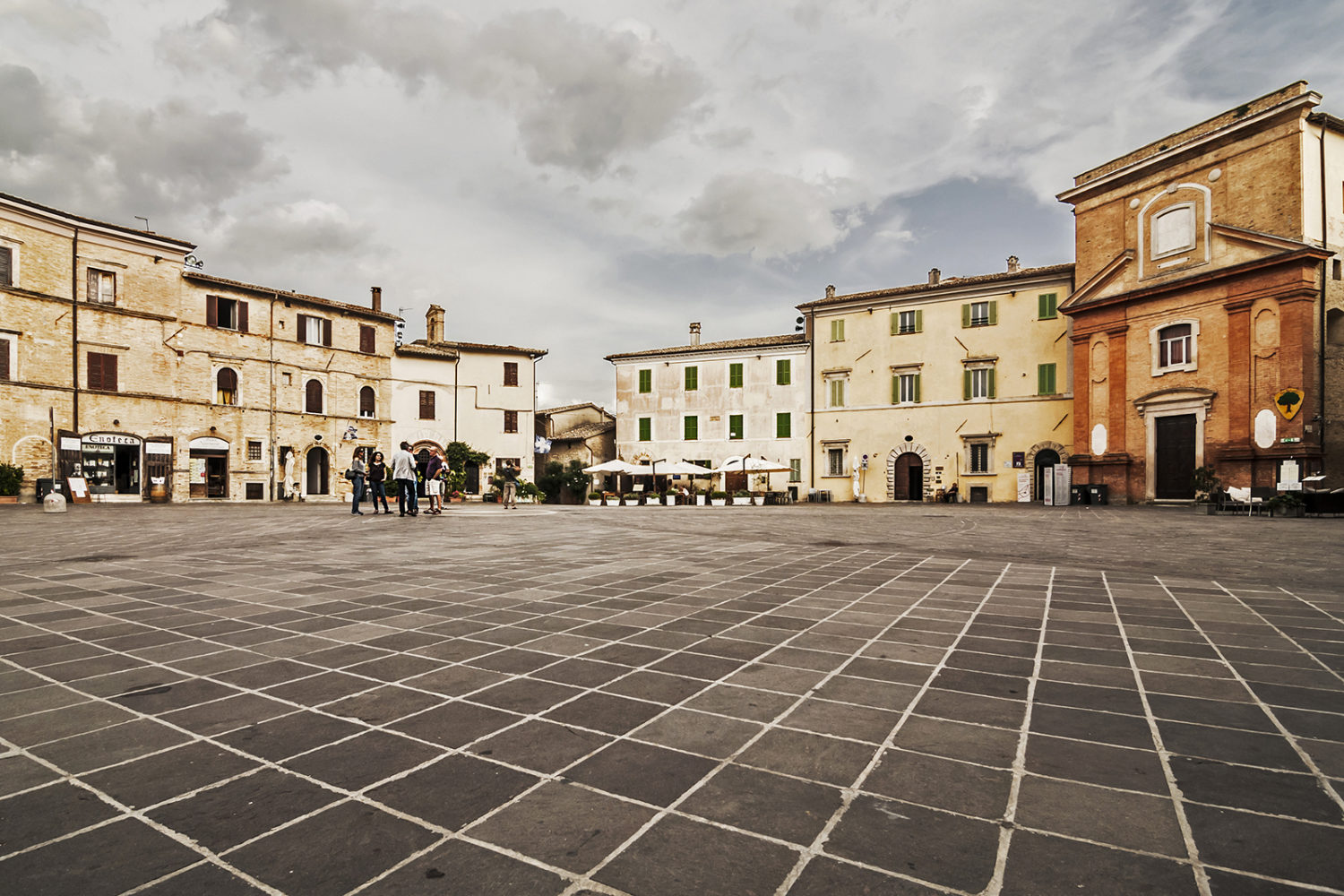 Italian red wines are so paradoxical. I kind of love that about them.

From Nero d’Avola to Amarone, they simultaneously cover a broad spectrum of aromas, flavors and textures; yet every one of them has the same tension between sweetness and bitterness. Italian red wines have an edge. It is this last facet — a zing of bitter — that gives them away.

When Montefalco Sagrantino (aka Sagrantino di Montefalco) first crosses your palate, you’ll probably nod your head and say “Italy.” Among the biggest, most potent and most profound red wines made in the country, it represents the soul of the nation quite well. And it hails from the heart of it, too, as Umbria’s signature vino. Let’s have a first-taste look, shall we?

About the Wine & Its Appellation

This first thing to know about Montefalco Sagrantino is that it hails from Umbria, the only province in Italy that does not share its border with a foreign country or the sea. Umbria is every bit as gorgeous as Tuscany, with ancient hilltop towns such as Assisi, Orvieto and Todi garnering the most attention.

The town of Montefalco lies south of Assisi, at the end of a chain of hills that run parallel to the Sibillini Mountains to the east. Three other towns in this range of hills — Bevanga, Gualdo Cattaneo and Giano dell’Umbria — can make Montefalco Sagrantino, as can Castel Ritaldi to the south. Each has its own unique expression of the wine. The spectrum of boldness seems to run from Montefalco (most structured) to Gualdo Catteneo (softest, earliest to drink).

The wine is made entirely from the Sagrantino grape, the most tannic red grape in Italy. Because of these tannins, Montefalco Sagrantino requires aging and decanting. By law, winemakers have to wait at least two-and-a-half years after harvest to release these wines, and even then, consumers would be wise to lay them down for another eight to 20 years. Montefalco Sagrantino is a stubborn bastard. While researching how long to decant the wine, I saw in a forum several responses from enthusiasts saying it didn’t matter. After five hours, eight hours, even 10 hours … the wine seemed unchanged. Only lengthy aging seems to mellow this wine.

As a dry wine, Montefalco Sagrantino is a relatively new phenomenon. The grape however, is quite ancient. My favorite wino naturalist from antiquity — Pliny the Elder — wrote about a tannic grape from Umbria called “Hirtiola,” and he was probably referring to Sagrantino. But only in the last few decades has the grape been used on its own to make a dry varietal wine. Before then, it had been used for blending as well as a partially dried passito version to enhance its concentration.

Modern-day wine writer and grape genealogist Ian d’Agata notes that the name change to Sagrantino either refers to a feast (sagra) or “wine of mass” (sacrestia). The grape’s wealth of polyphenols ensures that it can be stored for a long time without spoiling, making it ideal for communion wine. And I would say the tannic punch is a good reminder of God’s wrath, too.

Sagrantino grows best in soils rich with clay or loam, and it requires ample sunlight and heat to reach ripeness levels that can counter the tannins. While its best known version is Montefalco Sagrantino, it has been successfully grown in Sicily, Australia’s McLaren Vale and Barossa Valleys, and California’s Dry Creek Valley.

On a hot day last May, I had my first taste of Montefalco Sagrantino at a wine-tasting event hosted by the importer Wilson Daniels. The wines were from Arnaldo Caprai, one of the most highly regarded winemakers in Italy, and a family often regarded as instrumental in the elevation of Sagrantino’s role from obscure Umbrian grape to leading Italian fine wine.

I was immediately struck by how wild, earthy and tannic these wines were — not the best fit for such a hot day, but I made a note to flag Montefalco Sagrantino for the fall. This was a wine best served next to a pile of raked leaves or an autumnal bonfire.

Of particular note was the 2003 Arnaldo Caprai Sagrantino di Montefalco 25 Anni, which many feel is the greatest bottle of Sagrantino. I only had a few sips, so I won’t rate it fully, but I was impressed by its aromas of white truffles and blackberries. It felt like someone had unearthed this wine from the depths of a chilly oak forest.

By fall, I was on the hunt for Montefalco Sagrantino again, but instead of Caprai, I fetched a few bottles from the softer side of the appellation in Gualdo Cattaneo. Còlpetrone is an easy-to-find bottling and reasonably affordable in the low $20 range. For comparison, I also acquired two bottles of their Rosso di Montefalco.

A few weeks later — at 11am — I decanted a bottle of 2010 Còlpetrone’s Montefalco Sagrantino in preparation for our Sunday night dinner. I stole a sip to see how it was out of the bottle, and seven hours later, when I enjoyed my first glass, there wasn’t much of a noticeable difference. The tannins on this wine were unlike any I’ve encountered in a red wine before. “Beastly, fierce yet sprightly and somehow light,” is how I described them in my notes. A paradoxical description. Clearly I was a bit bewildered, but that’s what good wine does.

Interestingly, for such a bold wine, it has quite a suppressed aroma. No amount of decanting or swirling in the glass was going to release it, at least not on this night, and perhaps, not in this decade. The flavors were potent — black cherry, mushroom, earth, licorice, leather, all fused together — and they ultimately made this wine richly rewarding, especially when paired with our dish of sautéed chicken thighs, porcini mushrooms and roasted grapes in a rosé reduction sauce. The tannins worked like a buzzsaw through the herbs and fat of the dish.

Montefalco Sagrantino is quintessentially Italian, but is it a quintessential Italian wine? I’m of the opinion that great wines have a certain subtlety to them; a quality that lets them shift shapes and conform to different contexts and cuisines. Similar bold red wines from Italy — Amarone della Valpolicella, Barolo and Barbaresco, and Brunello di Montalcino — all do this very well. And while Montefalco Sagrantino is an excellent food wine with plenty of adventure, the subtlety is buried deep underneath all of that tannin.

One thing is for certain: my dentist is not going to be happy when I roll in for my next cleaning. 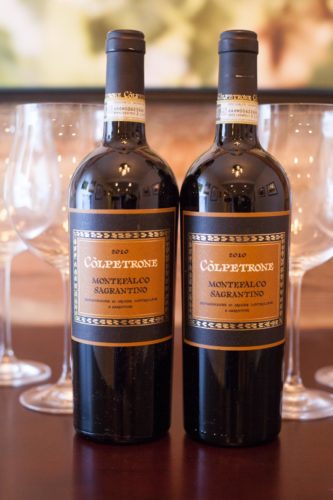 Tasting notes: A substantial and potent wine, even though it originates from the softer side of the Montefalco appellation. Decanted for 6 1/2 hours before dinner, and it only made a moderate difference. From my first sip to my last glass, this wine’s tannin level remained high, creating a “furry” sensation on the teeth. Another surprise lies in the aromas, which seem suppressed and incapable of release — as if those gorgeous black cherry, mushroom, earth, licorice, and leather notes you get on the palate are trapped under a layer of tannin. Medium acidity and medium length on the finish. Given its complexity and ability to age, however, this wine is a fantastic value.

Recommended for: We partnered this wine with chicken thighs, porcini mushrooms and green table grapes in a rosé reduction sauce with herbs — it was an amazing pairing, and it underscored that Sagrantino di Montefalco needs food to be enjoyed at its best.

Note: The wines featured in this article were provided as samples by VIAS Imports, Ltd.. Learn more about our editorial policy.