If You're Going to Start Drinking Red Bordeaux, You May As Well Start Here

I have written nearly 200 articles for Opening a Bottle, and only once have I mentioned a bottle from Bordeaux. I know: it’s outrageous.

But I have my reasons. My experience with the wines of Bordeaux has been uninspiring. They have struck me as impersonal and unadventurous. Granted, I have only dipped my toe in the pool, but that’s a pretty hard perception to shake.

However, to be critical of myself, much of this is surface observation. On the one hand, Bordeaux’s red wines are centered on Cabernet Sauvignon, Merlot and Petit Verdot — grapes that are so saturated on the market that I, like many, have grown numb to their charms. A cumbersome classification system has only gotten in the way of my understanding, making it easier to look elsewhere for captivating wine. Even the labels bore me: there is always a white background, faintly gold letters, and some fancy estate smack in the middle. Bottles of Bordeaux look like luxury resting on its laurels.

This is all perception, but its a perception that I share with many, and it has started to hurt Bordeaux in recent years, as sommeliers and other influencers have looked elsewhere for their kicks.

Either Bordeaux is due for a rebound, or we’re fools for ignoring it. Let’s change that and open a bottle of Margaux.

3 Reasons to Try a Margaux

Since this is a First-Taste Guide, I’m going to assume you are like me: you love wine, you love exploring new regions, but you don’t have the means — or the inherent foolishness — to drop thousands of dollars on a bottle of wine.

So as a result, I’m going separate the First-Growth wines of Bordeaux from the conversation. After all, Margaux is home to one of these estates — Château Margaux — and its wines start at $550/bottle. Maybe someday that will seem worth it, but we need to get to know this area first. (Although, it is important to note that many wine enthusiasts mean Château Margaux when they refer to Margaux. So, mental note: it is both an appellation, and an estate).

There is also another esteemed estate in Margaux, called Château Palmer, which was riding a decade’s-long wave of mediocrity in the 1850s when the classification system was put into place. Since then, it has turned its fortunes around, and many hold it in higher esteem than even Château Margaux. Alas, its most recent vintage fetches $278/bottle.

However, put Château Margaux and Château Palmer aside and you quickly discover that the appellation of Margaux still has a considerably high level of quality. And Bordeaux drinkers say it has been on the rise for a while.

There are more Second- and Third-Growth estates here than anywhere else in Bordeaux. We can thumb our noses at Bordeaux’s status tiers all we want, but the underlying truth behind this fact is Margaux’s consistency — much of which, it owes to its unique terroir.

Throughout the appellation, vines grown in an extremely thin, gravely soil that was spewed across the area by the lumbering Gironde nearby. As a result, little water is retained in the soil, forcing the vines to probe some 20 to 25 feet below the surface to find the nutrients and water they need. When vines struggle, their skins and juice tend to yield more character and intrigue than vines that have it easy. This, as well as the topsoil’s heat-reflecting properties, yields a wine that is more consistently supple and rounded than other appellations of Bordeaux.

Not surprising, the Romans figured this out long ago. Evidence suggests that Margaux was the first area in Bordeaux planted with vines, some 2,000 years ago. By the 1700s, it’s reputation was truly international (and yes, Thomas Jefferson was a fan, buying Margaux by the barrel during his time as U.S. Minister to France).

Margaux is also the warmest appellation on the Left Bank of the Gironde, which may explain why these wines are so intensely perfumed, yielding aromas that frequently recall dark berries, spring flowers, tobacco and truffle. To be labeled Margaux, the appellation’s laws require that grapes come from within the boundaries of five communes: Margaux, Soussans, Arsac, Labarde and Cantenac.

Only a handful of estates make white wine in Margaux, and when they do it consists of Sauvignon Blanc blended with Semillon. For our first taste, we’ll focus only on the rouge.

I’ll be visiting Bordeaux next week — a trip that fell in my lap thanks to this website. Since I don’t drink Bordeaux often (ummm, I mean hardly ever), I needed to do a little homework. So at a new wine shop in our neighborhood, I bought what they had: a bottle of 2012 La Réserve d’Angludet Margaux.

Made by Château Angludet, it is considered their Second Vin, a term particular to Bordeaux. Most estates designate their best wine as Grand Vins. Its a business tactic to garner more attention for certain bottles and, in turn, drive up demand for them. There may be truth to the notion that these wines are exceptional, and they often come from the best plots of vineyard.

Scratch the surface a bit more, and you arrive at the estate’s Second Vin, which will be more affordable yet still indicative of the house style. I know: at this point, all of these classifications make Bordeaux seem like a Rubik’s Cube. Either way, look for Second Vins as a stepping stone into the world of Margaux, and if you like what you find, ease yourself (and your wallet) up to the Grand Vins.

We opened La Réserve d’Angludet Margaux — a Second Vin — on a warm spring night that was ripe for grilling steaks.

By about the fourth or fifth sip of La Réserve, I said to my wife, Hailey: “This is one of the best Chianti I ever had.”

I meant it as a joke, but there was some truth behind the statement. My origin as a wine drinker will always be Italy, and that’s often where my comparisons come from. While Chianti Classico is made from entirely different grapes, the persuasion of that region’s winemakers is distinctly more from the Bordeaux school than the Burgundian school. Here, below the rim of the glass, I was reminded of Chianti’s forest berry complexion and leathery soul. But this particular wine, while dry, didn’t have the exceedingly oaky finish that sadly defines too many Chianti. It was — as advertised — supple, rounded, elegant and distinctly feminine for a claret. I kind of loved it.

The wine had a sturdy structure but was showing well now, some five years after vintage, and if I had to guess, it probably has another five years left in it. Most importantly, it was one of the more versatile Cabernet Sauvignon blends we’ve had at home. On night one, it perfectly matched not only the steak, but the avocado-peppedew pepper relish we served on top. And a distinct note recalling black truffles seemed to emerge with our mushroom couscous. On night two, it was also undaunted by a spicy pork loin with black beans and caramelized onions.

Was it the most exciting wine I’ve encountered this year? Not quite, but its versatility at the table made me appreciate it more than most Cabernet Sauvignon blends. As I head off to the city of Bordeaux to explore its wine bars and restaurant culture, I’m going to have a hard time overlooking Margaux on the menu. 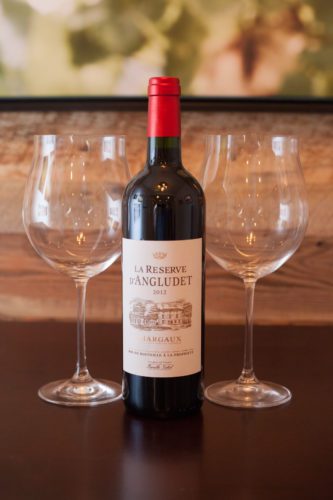 Tasting notes: Displays full and luxurious aromas that recall raspberries, cooked strawberries, leather, oak and hints of black truffle. Remarkably smooth texture, with a medium amount of acidity. Very few surprises, just nice. I couldn’t locate the percentages of the blend for this vintage, but it feels like a majority of it is Cabernet Sauvignon with quite a bit of Merlot to account for the plushness. A wine with a lot of elegance, but not too stuffy and bold to overwhelm. Great versatility with food: I paired it with steak one night, and a spicy pork loin the next; neither was overshadowed.

Recommended for: Would be a killer wine to serve with a steak sandwich topped with caramelized onions.