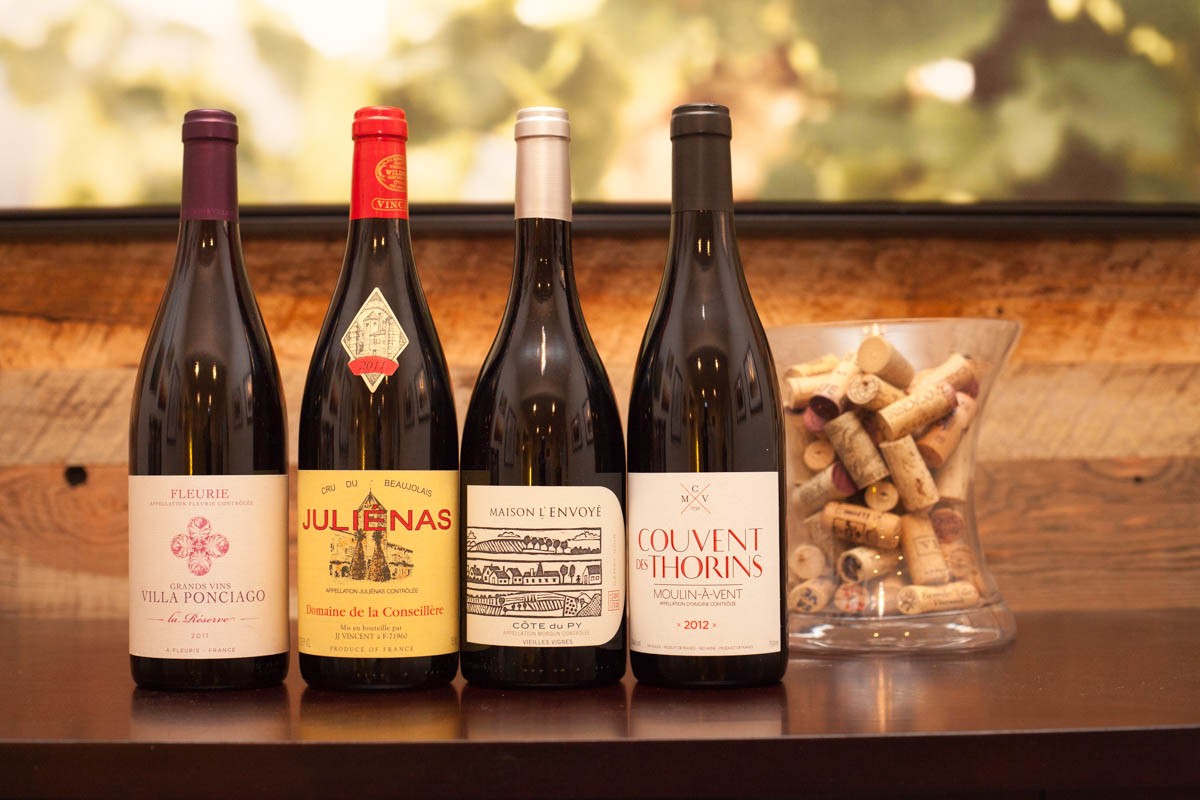 A few weeks ago, I had lunch with a former colleague and friend, and the subject of traveling around France came up. “I’d like to go to Beaujolais,” I told her. “I’ve started drinking Cru du Beaujolais and they’re incredible.”

Beaujolais: It is either considered tepid, uninteresting fruit juice that comes out around Thanksgiving (in the form of Beaujolais Nouveau) or it is stigmatized as “hipster wine” (which I take to mean that it is loved by indie types because its not popular and therefore, ironic).

That about sums up this wonderful yet seemingly cursed wine. At the moment, it is damned no matter what it does.

Because of this, I want to crusade for Cru du Beaujolais and get people on the train to share the fun. After all, these are very fun wines with plenty of complexity to stay interesting for hours. You can’t say that about a lot of wines.

So this past weekend, my wife and I hosted a wine-tasting party with some neighborhood friends, featuring four different Cru du Beaujolais wines, each originating from a different village with its own expression of the Gamay grape.

In our group, tasters had a loose familiarity with Beaujolais, but it was helpful to share some of the details first, such as:

For our tasting, we offered four wines from four different Cru, each with their own distinct expression and story. We poured them in order of lightest to boldest: Fleurie, Juliénas, Morgon and Moulin-à-Vent.

Just last year, I had my first taste of Cru du Beaujolais, and so far my experience was one bottle at a time. Hosting a party like this, where comparisons could be made across four wines without getting blitzed, seemed like a perfect idea. And while I can now make a few distinctions among the four wines, I’m not sure I have a clear favorite. 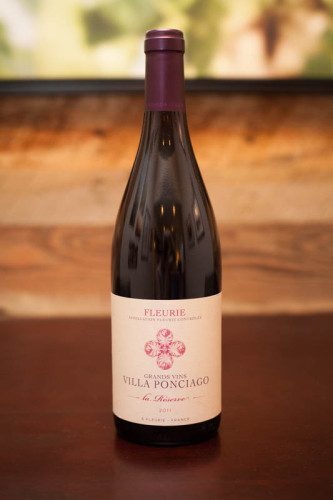 Our starting point, and the first sip of Cru du Beaujolais for many in the room, was a bottle of 2011 Villa Ponciago La Rèserve Fleurie. Immediately, it presented what these wines are known for: floral aromatics, a light body and silky texture. It burst with bright cherry flavors, and I detected a few perfume-like notes of lilac and vanilla bean on the nose, and walnut and even banana on the palate. Coming back to it later, I felt it had the strongest sense of place of the four wines: this is what Beaujolais tastes like.

Villa Ponciago is a fairly new endeavor, but the estate from which it harvests its grapes — and the tradition they are trying to preserve — goes back to 949 AD when the chateau owner donated his land to the Abbey of Cluny to save his soul. Reports indicate that 2011 was an excellent vintage in Beaujolais. I’m tempted to snatch up a few more bottles of this charming, relaxed and jolly wine to enjoy for the next five years. 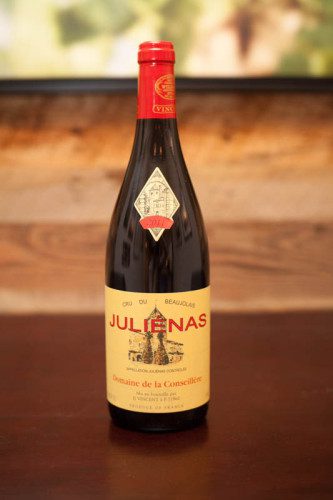 Next up, and served immediately alongside the Fleurie, was a bottle of 2011 Chateau de Fuissé Domaine de la Conseillère Juliénas.

Come again? I know, it’s a long name, and for a time we all looked at the labels and remarked on how confusing it is to even know what you’re getting with many French wines. Even if you do know place names well, this one might throw you for a loop since “Fuissé” is the second part of Pouilly-Fuissé, a nearby region famous for Chardonnay.

Anyhow, there’s no mistaking the big red letters across this label, announcing one of my favorite Crus of Beaujolais. If there is a common thread among Juliénas that I have discovered, it would be an earthiness that recalls mushrooms. Missing some of the jolliness of Beaujolais — that electric touch on the palate — this Juliénas presented deeper flavors of cherry jam, graphite, nettles and aromas of white flowers and strawberries. Exotic and begging to be paired with sinful foods such as creamy pasta, herby roasts and cheese plates, it was a pure delight, and one of the best wines I have had all year. 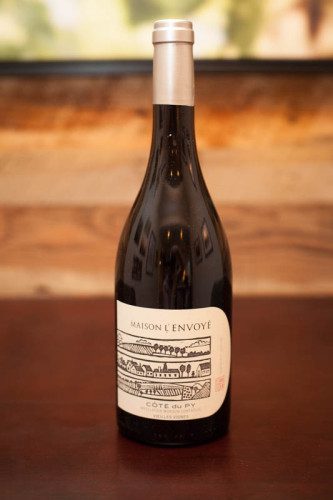 Going third in a wine-tasting lineup is a tall order. Wedged between other wines — most notably the one that goes last — it can be difficult for the wine to standout.

The 2012 Maison L’Envoye Morgon Côte du Py was so superb, it didn’t have this problem. Made from grapes grown on a rounded, volcanic slope in the heart of the Cru (the esteemed Côte du Py), this was the wine that, for a few of our guests, turned them into believers. Right away, the aromas and flavor profile recalled the Fleurie — racy acidity, candy-like fruit flavors and floral aromatics — only with a heartier backbone. It was fuller, deeper and darker in every way. The finish, for me, distinctly recalled crushed hazelnuts.

My other reference point for Morgon was the Jean-Marc Burgaud Morgon Côte du Py, which I had a few months back. Both wines seemed to carry a rather unusual note of watermelon and raspberry. Could this be a “tell” for Morgon?

It was an exciting discovery to see this tasting note match-up in my records. Nothing is more fascinating in wine than the notion of terroir, the communication of an area’s distinct natural attributes (topography, soil and climate) in a single glass of wine.

But for all the talk of terroir, it is really not that common. Here in Morgon’s Côte du Py, we may just have it. 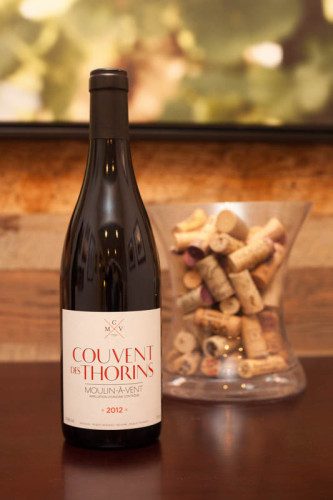 Finally, we opened the 2012 Château du Moulin-à-Vent Couvent des Thorins. The progression of wines was intended to be light (Fleurie) to medium (Juliénas) to bold (Morgon) to boldest (Moulin-à-Vent). Only the Juliénas defied this trend, as it seemed deeper than expected. But as soon as the Moulin-à-Vent was opened, it was clear why this Cru is the most esteemed of Beaujolais.

Put simply, it is a wine that amplifies the area’s attributes. The aromas of cherry, lilac and stone seem to travel further from the glass. The flavors seem to dominate the palate more, and the finish lasts for minutes. As soon as one guest sampled it, she crossed the room to insist her husband try it.

We were first introduced to this wine a month ago at a Denver restaurant called Beast & Bottle, and while the wine was excellent in that setting, here it took on a new life when sampled side-by-side with other Cru du Beaujolais. Then, I thought it was a slightly more bold rendition. I was wrong: it’s quite a bit more amplified. On one side of the wine was a swirl of fruit: cherry, raspberry and banana. On the other side, a racy acidity with toasted notes of coconut and a hint of stoniness. I found it difficult to describe, even though it was obviously great (and four out of six people’s favorite wine of the night).

I couldn’t make up my mind as to which was my favorite, but given the two times I’ve had this Moulin-à-Vent in the last month, it’s clear to me that it is an upper-echelon wine worth hunting down.

I could spend the next 10 to 20 years returning to Cru du Beaujolais wines and not feel as though I have them figured out. Generalizations are a slippery slope when it comes to wine, with exceptions breaking every rule. And, it should be noted again, these are just four of the 10 Cru of the area.

But if you are looking over these four Cru (and they are four of the most readily found in the U.S.) and you want to distill them down for a certain occasion, its safe to say:

And if anyone suggests these are hipster wines, just nod your head and smile. It’s a phase, and these wines are timeless enough to outlast any trend. 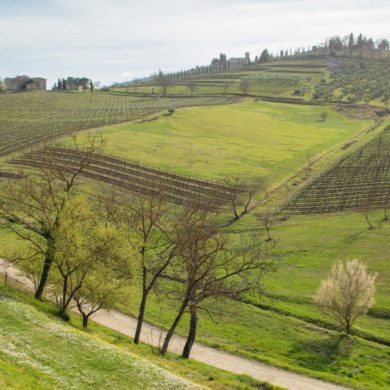 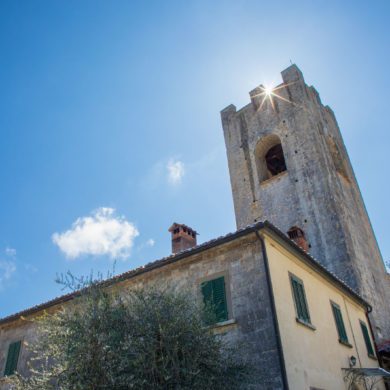 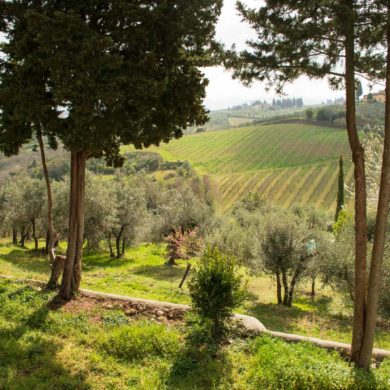