Recommending wines and writing about them isn’t a new phenomenon. Just ask Pliny the Elder or Leonardo di Vinci about our next wine, Valtellina Superiore.

OK, you can’t (obviously), but they both wrote about the “powerful” wines originating from Valtellina, a 25-mile stretch of alpine hillside northeast of Lake Como. Here, an impressive 1,500-miles of stone walls terrace the slopes so that viticulture can occur, and the vines are almost all Nebbiolo, the most terroir-expressive red grape in Italy.

Never heard of Valtellina? You’re not alone. In the United States, its a relatively obscure wine, overshadowed by the demand for Barolo, Super Tuscans, Chianti Classico and other fine wines from The Boot. Which is a shame. What it lacks in name recognition, it more than delivers in uniqueness, elegance and aromatics.

A Taste of Valtellina Superiore 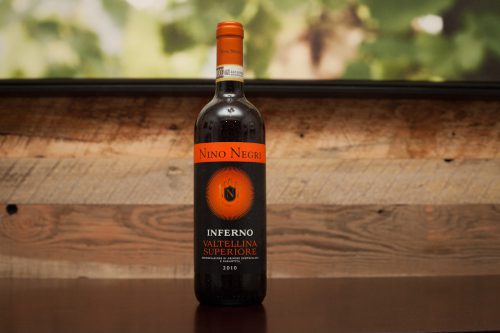 On Easter Sunday, we enjoyed a Valtellina Superiore in the form of Nino Negri’s “Inferno,” which is named after the hot-as-hell vineyard from which the grapes were grown. Angled like a solar panel to the south, the steep slopes of the Inferno vineyard are massively difficult to harvest. Picking has to be done by hand, and there is the added problem of transporting crates of grapes down the slope. So the estate regularly uses a helicopter to airlift the crates off the mountain and deliver them, laden with ripe Nebbiolo, to the winery. Somehow, after all of that, a bottle of “Inferno” only costs $25.

If you love both Barolo and the Pinot Noir of Burgundy, trying “Inferno” is a must. There is the beautiful orangish-garnet color indicative of the Nebbiolo grape (especially aged Nebbiolo), as well as an earthy and floral brawniness in the aroma that is the familiar embrace of Barolo and Barbaresco. But then the wine itself is elegant and even light in body, recalling Pinot Noir. Aromas and flavors of cherry-rhubarb transition to raspberry-plum, herbs, roses and even a pronounced savory note.

Inferno is a wonderfully confusing experience because it defies so much expectation. You are no longer in the familiar “tar and roses” territory of the Langhe or even Gattinara — this is a whole different beast. High in the granite and limestone Alps of Valtellina, where the days are hotter and nights are colder than the Langhe, Nebbiolo can show off a contrasting expression of itself that is delicate yet wild and wholly unique.

I should point out that Valtellina Superiore is one of two highly regarded wines produced from this area. The other — Sforzato di Valtellina — is made of dried Nebbiolo for increased concentration and power, similar to how Amerone della Valpolicella is made. However, I have found the more straightforward Valtellina Superiore to be an easier find in the United States — particularly online — and they tend to be quite a bit more affordable.

Next up for me is to try Sandro Fay’s 2010 Valtellina Superiore called “Ca Morei” — which is from the Valgella vineyard — and to continue to hunt for a Sforzato di Valtellina for comparison sake. If those wines confirm what I suspect, Valtellina Superiore might just be — for me at least — in the same pantheon as Barolo and Barbaresco. 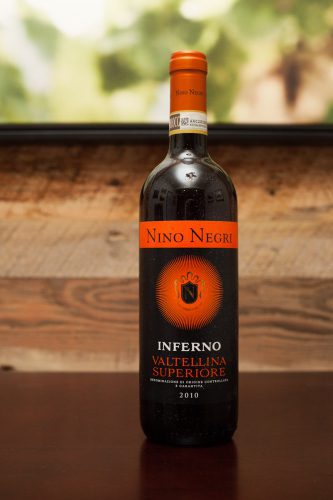 Valtellina Superiore DOCG, Italy
Grapes: Nebbiolo or “Chiavennasca” (100%)
Alcohol: 13%
Ratings: ★★★★★ (out of five)
• Profile: ★★★★★
Food Friendliness: ★★★★★
• Value: ★★★★
Tasting notes: The first sign that this wine was unique came as I poured it into a decanter: the wine is so garnet in color that it appears rusty around the edges, and surprisingly translucent. Aromas rose from the decanter as it was poured: cherry-rhubarb, thyme, rose and smoked meat. On the palate, it first comes off with dark bitter fruits such as black currant, but shortly becomes more focused on raspberry and plum. This is a noticeably savory wine, but it is not gamey like you sometimes find in Syrah. Elegant, smooth and delicate, yet gregarious … this is a wine that lingers and lingers. Should age very well.

Recommended for: The temptation is to partner this wine with braised meat, but I would treat it like a Pinot Noir instead: fattier poultry dishes, seared ahi tuna, beet salad … they would all be amazing with it. I found it to be ideal with a cheese plate of aged parmesan and prosciutto. But as with all Italian wines, pair it with what the locals eat, in this case, braseola, a cured beef.