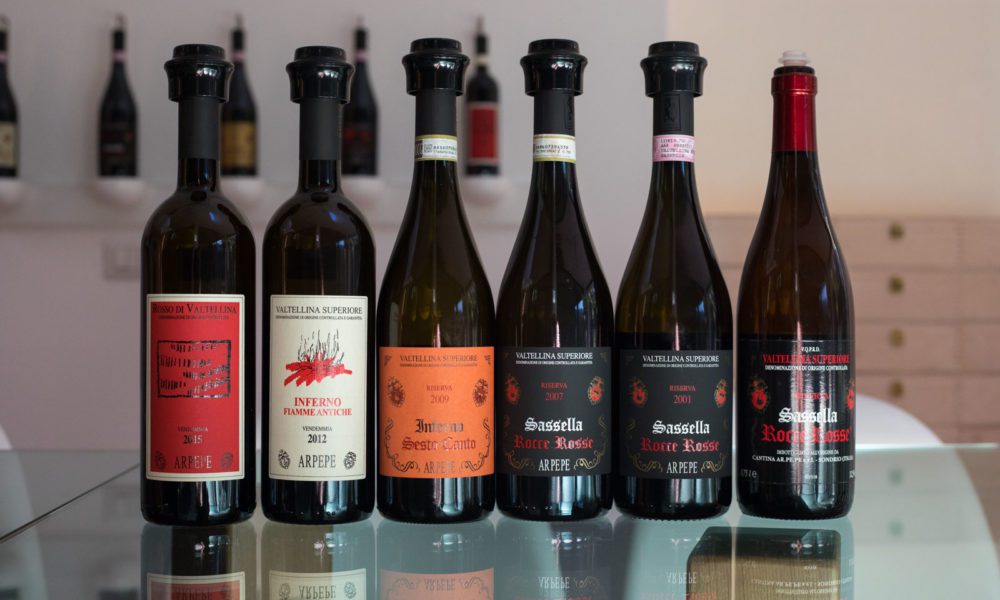 Few winemakers in the world have impressed me more than ARPEPE.

How so? Let’s start with their work ethic. ARPEPE’s steep, alpine vineyards require up to 1,500 hours of labor per hectare each vintage (compared to roughly 250 hours in Italy’s flatland vineyards). Until the grapes reach the winery, nothing can be done with machines. ARPEPE is best known for their work in the Sassella subzone, a portion of Valtellina where it looks like the mountain has spilled its rocky guts into the valley, but they also have vertigo-inducing plots in Grumello and Inferno.

While their labor in the vineyard isn’t entirely unique in Valtellina, it is what siblings Isabella, Emanuele and Guido Pelizzatti Perego do in the winery that turns their toil into magic. The family has a rigid commitment to extended maceration and aging their wines for a long time before release, with their top wines spending up to five years in large chestnut casks before bottling (with a few more years in bottle, for good measure). The use of chestnut is particularly interesting. Banned by regulations in Barolo and Barbaresco (as well as several other DOCGs around Italy), the chestnut staves of their casks seem to impart their alpine Nebbiolo wines with a caressing texture.

In the end, drinking an ARPEPE wine is a mysterious and ethereal experience best reserved for special moments when you can fully engage with them. They are one of only a handful of producers whose wines I am personally collecting.

ARPEPE only works with Nebbiolo (known as Chiavennasca in Valtellina) and they have a tailored mix of wines to acutely reflect each vintage. That means that, from year to year, the product mix can be quite different, but the approach ensures a ridiculous level of quality in their wines.

Every year they make a Rosso di Valtellina, as well as a blend of parcels across three Valtellina subzones for the “Il Pettirosso” Valtellina Superiore. In good vintages, ARPEPE makes three riserva wines (one each from the Sassella, Grumello and Inferno zones of Valtellina) with extended maceration and roughly two-and-a-half years of cask aging. But it is the extraordinary vintages — such as 2009 and 2013 — that you’ll want to keep your eyes peeled. That’s when ARPEPE produces its five “cru riserva” wines. They are among the best wines in all of Italy, if not the world.

Among the very best “entry-level” Nebbiolo wines in Italy, the Rosso can complement an enormous array of cuisines. A consistent performer, year-in year-out. Fresh, aromatic and vital.

No other wine straddles the line between Nebbiolo and Burgundian Pinot Noir more than “Buon Consiglio.” From the precipitous vineyard above the Sondrio-based winery, which is crowded by the Grumello Castle.

Equally impressive is ARPEPE’s Riserva from a tiny plot in the Inferno subzone of Valtellina. “Sesto Canto” has many layers, with a signature resin-like note on the nose and the finish. A wine of great depth and poise.

“Rocce Rosse” is the most iconic wine of Valtellina, coming from a craggy section of Sassella where the rocks are pinkish from iron. I was fortunate to have sampled the 1996 vintage of the “Rocce Rosse” — at 21 years of age — and it was amazingly fresh, with the energy of a wine that could run a marathon. “Rocce Rosse” belongs in the cellar for as long as you can stand it.

Tastings: On weekdays by appointment only (except during the harvest season). Contact the winery directly at least two weeks in advance at [email protected] or +39 0342 214120