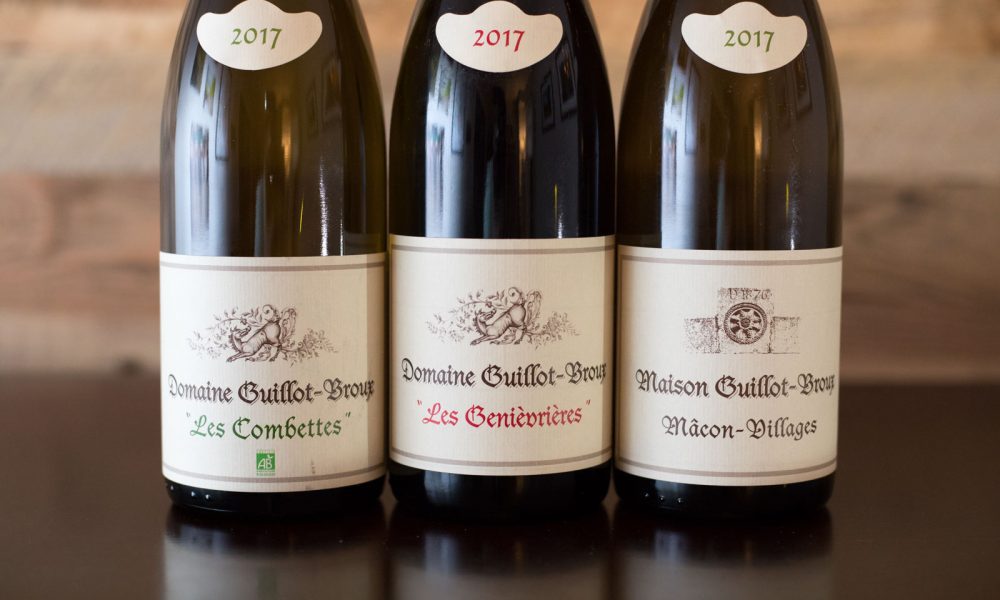 There are essentially two wineries here that I am lumping under the common family name Guillot-Broux: Domaine Guillot-Broux, which produces acutely focused Chardonnay, Pinot Noir and Gamay wines from a variety of plots around the Mâconnais; and the négociant house, Maison Guillot-Broux, which produces regional wines with the same amount of care. The same family runs both and they share a similar brand. More importantly, I’ve tasted wines from both and eagerly endorse them.

The Domaine currently offers six whites and three reds, while the Maison produces a Bourgogne Rouge, a Mâcon Rouge and a Mâcon-Villages blend of Chardonnay. All of the wines are organic, as this is one of the earliest estates in Burgundy to embrace the modern organic ethos.

I’ve been tasting these wines for a while now, but only recently had them in close succession to compare them. Look for “Les Combettes,” a subtle Mâcon-Chardonnay that whispers tones of light pineapple, pear and ginger spice, or the even more affordable Mâcon-Villages from Maison Guillot-Broux, which is as easy to enjoy as an early summer ride on a cruiser bike. The Pinot Noir from “Les Genièvrières” (place of junipers) is nimble, light and ever-so-inviting with its aromatic suggestions of raspberry, spiced cherries and sweet almond.

Of Burgundy’s five main areas — Chablis, Côte de Nuits, Côte de Beaune, Côte Challonais and Mâconnais — the Mâconnais seems to get the most overlooked in the press these days. Perhaps that’s because Pouilly-Fuissé, it’s leading appellation, peaked during the years when tasting oak was all the rage. Or maybe it has to do with the fact that the Mâconnais possesses the region’s warmest climate, which can easily translate into Burgundy’s most blown-out wines if a producer is not careful.

Now think of the exact opposite, and that’s what you’ll find with the wines of Domaine and Maison Guillot-Broux. These are Burgundian wines that want to be opened young, although they could go some distance. They will never blast you with piña colada-like aromas or mimic their California Pinot pals with their brawn. Rather, they are subdued wines whose gentle genius takes time to emerge in the glass. An added bonus: they’re better priced than many domestic wines of the same caliber.

The domaine is open for wine tastings during weekdays. Check the website for hours and details.