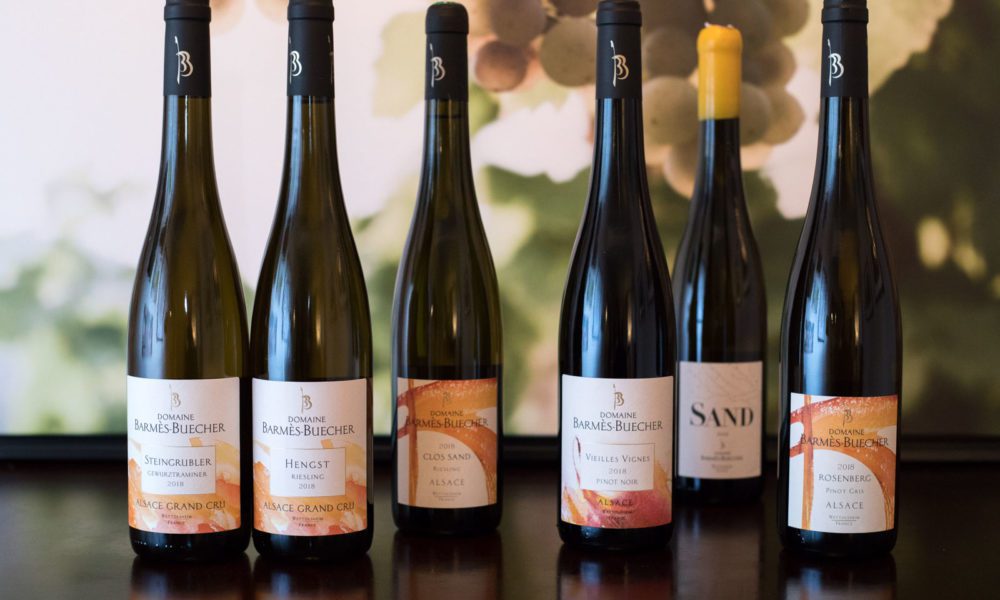 Pour yourself a glass of Barmès-Buecher — such as the Grand Cru Hengst Riesling, or the young-vine Pinot Blanc that’s labeled simply as “Sand” — and take a look at the color. They seem to glow. No, this is not the product of ambition (such as extraction, heavy oak use) nor is it a marketing trick from additives. God no. For if you lift that glass to your nose, you’ll be diving into a profusion of aromas.

Put simply, the wines of Barmès-Buecher are alive. There is no other way to put it.

The domaine was founded in 1985 by a husband-and-wife team in Wettolsheim — François and Geneviève Barmès — who combined the vineyard holdings of their two families, which dated back to the 17th century. In the 1990s, François learned of biodynamics and never looked back, converting the entire estate. Tragically, he passed away in an accident in 2011, leaving the estate to his wife, his son Maxime (now the winemaker) and daughter, Sophie (who manages sales). But the family shares a single business card that lists all three of their names under the joint title of Propriétaires Vignerons. They are in this together.

Being biodynamic is not in itself unique, especially in Alsace, where the climate is very favorable to those who want to avoid chemical treatments of their vines. But there is something about Barmès-Buecher’s wines that stand out. They are extra vivid, like drinking in surround sound. At the 2018 Millesimes d’Alsace grand tasting, I tasted well over 100 different Riesling. I don’t recommend this approach (in fact, I’ve cursed it as the primary method of wine criticism for years), but who stood out to me most? Barmès-Buecher. And upon revisiting many of their wines back home — where they had weathered the trans-Atlantic passage and cross-country shipping — they still struck me as symphonic and delicious as they were in Colmar.

I wrestle with the principles of biodynamics all the time. Viewing the vines and their fruit as part of an integrated natural system has always resonated with me. But some treatments seem far-fetched if not downright hokey. But if the outcome is this — wines with this much life, with this much to say about their origin — then I say go for it. Clearly, its a discipline that requires an all-or-nothing dedication, and that alone results in careful winemaking. Barmès-Buecher reveals their dedication and meticulousness in each glass.

Only a small selection of these wines make it to the United States (see importer information above), but they’re worth the hunt. If you are visiting Alsace, move them toward the top of your list for a domaine visit. The wines are not only beautiful, but the family has an ebullient and hospitable spirit. Wettolsheim is also a lovely little village to explore, but not as tourist-crazed as Hunawihr, Riquewihr and even Turckheim.

How into soil are they in Alsace? Well, in this case, the winery went with “sand” as a more marketable name than “Pinot Blanc,” because — you guess it — the vineyard has sandy soils. It makes my list here because of its joyous energy and conviviality. Who could turn down what this wine offers? Delicate pineapple, white peach, yellow flower and herbal tones with a pleasant prickle of acidity … it’s tailor-made for sunny patios.

This family’s wines frequently suggest tones and aromas that I’ve not encountered elsewhere. In the case of the Pinot Gris from the Rosenberg vineyard, that note is a streak of iron which anchors and contrasts the wine’s desire to lift up and float away. It is a compelling balancing act, and yet another example of how Alsace makes the world’s best wines from this grape.

From Barmès-Buecher’s monopole vineyard outside Wettolsheim. This is Riesling with a falsetto voice: very clear, very precise and pure. Its aromas are suggestive of honeycrisp apple, lime pith, violets and almond, with a featherweight body that might make you wonder if it is among Alsace’s most delicate Riesling.

Here is where Barmès-Buecher’s greatness is confirmed. Contrasting these two Grand Cru Riesling is no easy task, as their complexity and agility make them a perennial moving target to describe. The Grand Cru Hengst is known in Alsace as a powerful terroir, which is confirmed only on the nose here: a tsunami of tones that suggested citrus zest, dark apple, beeswax, sandalwood, olive and soft leather to me. The body, however, carries a beautiful diaphanous quality (yes, diaphanous … the word came to me and I had to look it up, but it is the only word to describe Barmès-Buecher’s Hengst on the palate).

Their Riesling from the Grand Cru Steingrubler is equally captivating, and perhaps a bit lighter, but no less substantial in its shape-shifting powers. My first impression of this wine’s aromas was so memorable: it rooted around my memory and extracted a willow-lined river in Colorado, the smell of being outside and carefree. Yes, that’s oddly specific, but in Barmès-Buecher’s best wines, I always find a bundle of surprises.

Lastly, we have this Grand Cru Gewurztraminer, which Maxime tends to vinify as sweet (although experiments are underway to see if a dry version with longer maceration can achieve balance). Gewurztraminer is naturally high in alcohol, and to be honest, I find it to be far more intriguing with some residual sugar for the sake of keeping the alcohol lower, and the texture more broad. It is a wine that makes perfect sense in Alsace, with Alsatian cuisine; but here in the United States, you might struggle to match it. I will say this: find it for the curiosity factor, and forego dessert for a few nights to taste this quixotic blend of rose, lychee, grapefruit and briny tones.

Tastings are only available with an advanced appointment. As noted above, only about four or five of their wines are imported to the United States, so visiting the domaine (or buying their wines at a local wine shop) should be a priority if you are visiting Alsace or France.