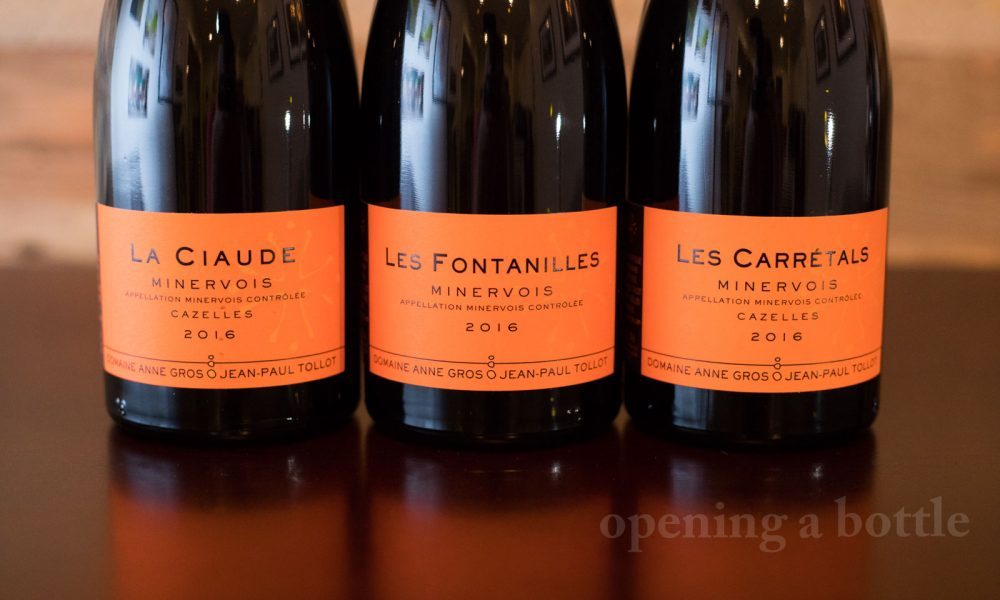 In the dance hall of French wine, the Languedoc dances to its own beat. That is in part what Anne Gros and Jean-Paul Tollot found appealing about the region when they scoped out vineyards for a side project in 2006. There was a certain freedom to what they could make that was liberating. The partnership between the two Burgundian practitioners of Pinot Noir soon zeroed in on old-vine Carignan and Grenache, and it is from three separate plots that they make some of France’s best high-octane wine.

Now, generally speaking, I have a clear preference for elegant wines over powerful ones, but Anne Gros and Jean-Paul Tollot let me have both. They prove that concentrated fruit tones don’t have to wash away the exciting tertiary aromas and flavors that keep a bottle of wine interesting for a whole night. They prove that Carignan doesn’t have kick the door in every time it makes an entrance. They prove that “project wines” — where a restless winemaker sets up shop in a completely different environment — can be humble and evocative of place, too. And finally, they prove that my bias towards “elegant” wine regions shouldn’t stop me from further exploring places like the Languedoc.

There are five wines from this winery, with the three Minervois making the biggest splash.

For an age-worthy wine, look to “Les Fontanilles,” a blend of Grenache (40%) with 20% each to Carignan, Syrah and Cinsault that is suggestive of smoky blackberries and musk.

“La Ciaude” — a blend of Carignan, Syrah and Grenache — draws its oomph from a plot of Carignan vines dating back to 1904. Despite its concentration and power, the wine is remarkably patient, easy-going, yet lithe and sinewy.

The best wine, and a real showpiece of Languedoc’s prowess, is “Les Carrétals,” another wine led by old-vine Carignan grapes that lend a fruity, potent and elegant expression on the nose. There is a fine mineral quality to the texture, and a finish that lingers like the scent in the air after a rainstorm.

Domaine Anne Gros & Jean-Paul Tollot welcomes visitors to its Minervois estate, but by appointment only.